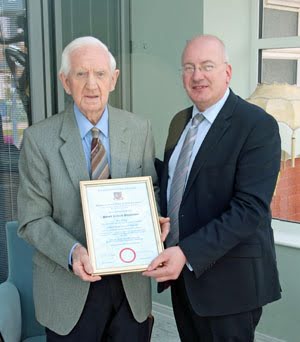 Springfield Court Nursing Home in Aughton was the venue for a very pleasant visit by Assistant Provincial Grand Master Robert Wright to present Harold Richard Stephenson PPrJGW, JP, DL with his 50 year certificate in Freemasonry as a member of the Craft.

Harold, who is now 89 years of age, covered the North of England working for many years as a sales manager for Vesty Foods Limited. He became a Justice of the Peace in the Ormskirk Magistrates Court in 1968, later becoming chairman of the bench of magistrates. In 1995 due to his length of service to the court he received the honour of Deputy Lieutenant of Lancashire an honour richly deserved for his service to the community.

He received his first honour into Provincial Grand Lodge in 1981 with the rank of PPrSGD and was promoted to the rank of PPrJGW in 1986. Harold has been a well-respected member of Aughton Lodge and as he is not well enough to attend meetings is now an honorary member. He was also a member of Ormskirk Priory Chapter No 4007 becoming first principal in 1980 is now an honorary member. 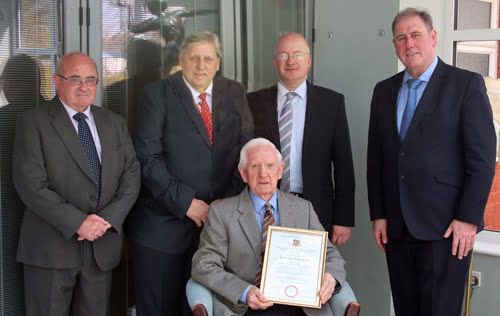 Frank took time to explain to Harold the certificate signed by the Provincial Grand Master Tony Harrison before handing it to Robert who was delighted to present it to Harold saying that he hoped he would display it in a place of prominence in his room to remind him every day of his dedication to Freemasonry.

Harold accepted this with thanks and then the staff of the home served tea and biscuits; a pleasant hour was spent remembering old times.

Springfield Court is a purpose built care home catering for those who are over the age of 65 and require general nursing care. It is registered for 56 permanent places and offers luxury hotel style accommodation in a tranquil setting.