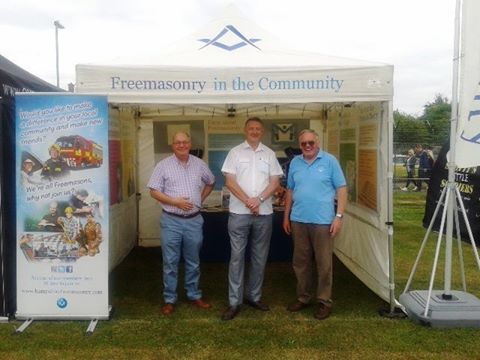 Freemasonry in the Community – Hampshire & IOW

Our Solent Area FITC team were in action over the weekend when they attended the H.M.S. Sultan Summer Show in Gosport. This is one of the Royal Navy’s main shows of the year and FITC were delighted to be allowed to attend. With so many ex-service personnel in our lodges it’s always good to be able to continue to support our armed forces.

It is estimated that some 20, 000 visitors attended along with many local organisations and companies. The FITC Lite unit was located to the right of the main access to the show which was a good location as it was the third stand inside the ground.

A considerable number of other charitable, Service and local community groups were in attendance, including Rotary, Lions, SSAFA etc. all of whom were collecting donations. We believe we stood out as we were not asking for money and hence this increased the publics curiosity as to what we do, therefore providing an excellent opportunity to talk about Freemasonry and our Community work.

With the experienced Masons on the stand, some of which were ex-service, we were able to interact with the Navy Personnel, both current and retired, and visitors alike. We particularly stressed the similarities between Freemasonry and Service life, i.e “family”, mutual support, helping others and the Festive Board similar to a Mess meal etc.

The Stand was open from 09:30 to 17:30 each day and we attracted a good foot fall. Around 25 cards were given out including three who completed their cards on the Stand. Numerous copies of Insight and “All about Freemasonry” flyers were given to members of the public who just wanted to know what we do. On the Sunday we displayed a sign saying “Freemasonry: Do you want to know the secret?” This seemed to work as many visitors asked what our secret was!! At least it got them in to talk…

On the Sunday we were visited by Captain Gully, Commanding Officer of HMS Sultan and the Mayor of Gosport, Lynn Hook who congratulated us on our recent Charity Cheque giving day and the work we do in the local community.

Very many thanks to all the Ambassadors who worked so hard to make the weekend so successful.