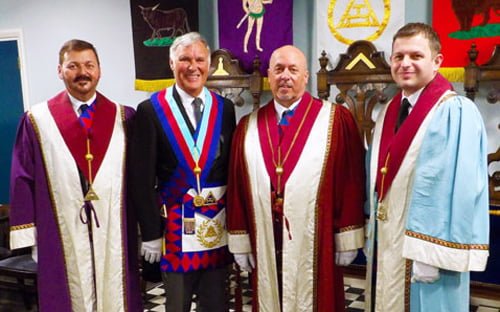 The companions of Blackpool Chapter of Integrity No 5864 are determined to secure success and to help them in their quest; they appear to have engaged the luck of the gypsies. Not that they require luck. The chapter has a strong core of experienced and gifted Masons and a healthy number of enthusiastic and equally talented young companions. But then again, a bit more help never goes amiss.

Installing Romani gypsy Adolphus Taylor into the first principal’s chair was the most recent decision that brought good fortune to the chapter for, as principal guest and representative of the Grand Superintendent Tony Harrison, Roger Perry was in attendance at the installation ceremony. Roger Perry is one of nature’s gentlemen and in him one finds a chap of such charm and elegance that even Dale Carnegie, author of ‘How to win friends and influence people’ would have felt compelled to raise his hat. Roger’s company was further boosted by two more of the most charming grand officers in the forms of Stuart Thornber and David Harrison; a most formidable trio of grand dignitaries to assemble at a chapter installation.

Adding even greater lustre to the occasion was Chairman of Blackpool Group Peter Bentham and his vice chairman John Turpin, along with acting Provincial grand officers Ron Strangwick, Bill Ainsworth, Martin Linton and Gordon Ivett on their maiden outing following their investiture at Provincial Grand Chapter in Southport the previous day.

Under the rigorous and efficient guidance of the chapter’s director of ceremonies Ian Stirling, first principal John Chapman dispatched the general business of the chapter with promptitude and cheeriness. John is a renowned ritualist; faultless and sincere. So much so that Sir Laurence Olivier would have drawn inspiration from him. 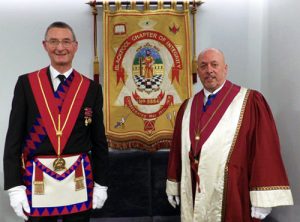 From its commencement, it was obvious that the day was to be filled with genuine and honest performances. There was that certain je ne sais quoi in the air; a buzz that each performer was going to do his best for the sake of the team. And all rose to the occasion. Sinews were stiffened and each summoned the blood. The result was a delightful ceremony with little hesitation and, if there were any hiccups, the general air of efficacy and camaraderie made them virtually imperceptible.

After the dignitaries had processed in with due reverence and solemnity, the ice was soon broken by Roger Perry’s ready smile and welcoming words. The ensemble settled down and Alan Barnes installed Anthony Rigby into the third principal’s chair in superb style, a standard maintained throughout the procedures of Adolphus Taylor installing Alan into the second principal’s office and John Chapman installing Adolphus into the first principal’s chair.

Adolphus, in turn, did a fine job of investing John as the immediate past first principal, a part of the ceremony that was further reinforced by a magnificent rendition of the address to the immediate past first principal by Trevor Richards. It was evident that all had absorbed the guidance of the chapter’s director of ceremonies Ian Stirling and his assistant Jon Selcoe. Each element had gone like clockwork. 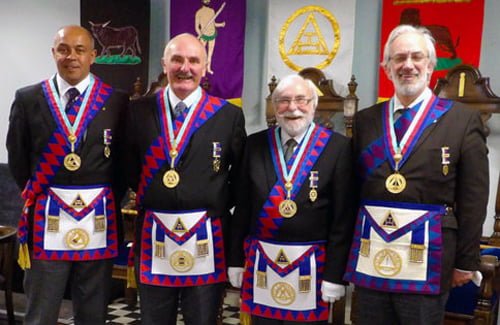 Investiture of the officers of the chapter followed with the same efficiency and splendour as the rest of the ceremony and set the stage for further excellence in the robe addresses to the three principals. Younger members of the chapter Kevin Croft and Jon Moss provided enchanting addresses to the first and second principals respectively and Masonic stalwart Alan Whitehouse completed the robe addresses with a sincere presentation to the third principal.

Philip Alderson was deliberate and precise in his address to the three principals whilst Jon Selcoe, a master of ritual brought his signature confidence and animation to his address to the officers of the chapter. The remaining address; that to the companions of the chapter, was in the hands of Roger Perry and although there were a couple of hitches, the sincerity, passion and genuineness was clearly evident by his zip and style. It was with a courteous grace of humanism that Roger acknowledged that to err is human, a factor that added still further to the sincerity of the presentation.

The whole ceremony had been a major triumph and perhaps, after all, that gypsy luck had played a small part. There was one final moment of doubt however when John Chapman in an unintentional slip of the tongue announced: “Most excellent, that now concludes the ceremony of your initiation”, immediately correcting the error with: “I mean installation.” 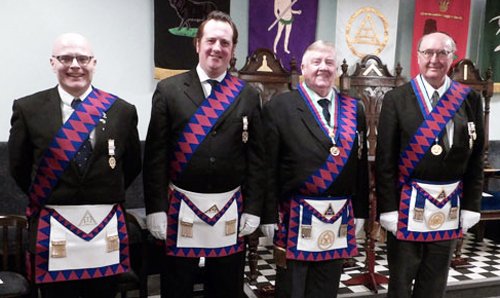 Being the cue for Roger to convey the greeting of the Grand Superintendent, he was lavish in his praise for the quality of the ceremony and the overall ambience of the convocation. It was clearly apparent that the companions enjoyed their Royal Arch Masonry and that all had worked diligently and cheerfully in producing an excellent ceremony.

In response Adolphus Taylor, now comfortably occupying the first principal’s chair, was eager to present charitable disbursements amounting to a grand total of £675; £425 going to the West Lancashire Freemasons’ Charity, £75 to Blackpool Tiggers, £75 to Disability First and £100 to the Blackpool Masonic Club. Roger received them with gratitude and commented on the enormous generosity of the chapter’s companions.

Following Stuart Thornber’s eloquent response after the first rising, in which he reiterated Roger’s praise of all the participants in the ceremony, the three grand dignitaries retired to the light-hearted refrain of the theme tune of ‘Last of the Summer Wine’, delivered by John Wall at the organ.

The festive banquet that followed the formal ceremony maintained a strong sense of the camaraderie and cheeriness that had accompanied the formalities of the evening. Good food, attentive wine stewards and jovial banter ensured continued success. All were having a most enjoyable time. 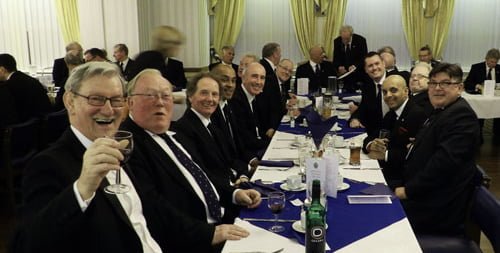 Companions enjoying the cheery atmosphere of the festive banquet.

And it was with a cheerful and stimulating note that Roger now set himself to strike in his response to the toast to the grand officers. Humorous anecdotes interspersed with serious messages from the Province provided an entertaining yet informative speech that was much appreciated by his audience.

The toast to the three principals by John Chapman was also in jovial mood, concluded in fine manner with David Harrison, accompanied by John Wall at the piano, singing the ‘principals’ song’ with charismatic gusto.

Adolphus Taylor, responding on behalf of the three principals was visibly moved and expressed his gratitude to all who had made the evening so memorable. Adolphus is passionately proud of his Romani roots and likes nothing more than to talk of his heritage. It is believed that Romani gypsies originated from northern India and escaping persecution migrated into the middle-east and Europe sometime between the 6th and 11th centuries.

The Romani language, as Adolphus will explain to a ready ear, is related to Hindustani and Sinhalese, baring evidence of its Indian origins. It was a widely held view in the middle-ages that gypsies were exiled from Egypt for harbouring the baby Jesus during King Herod’s reign of terror and hence the derivation of the word ‘gypsy’, stemming from ‘Egyptians’.

Adolphus’ pride in his heritage is matched by his pride in Masonry and if gypsy luck doesn’t bring deserved success as first principal of Blackpool Chapter of Integrity, his hard work will most certainly achieve it. One doesn’t need a crystal ball to look into the future to know that the companions will support Adolphus, Alan and Anthony to the full. Their performance at the installation is ample evidence of their commitment.