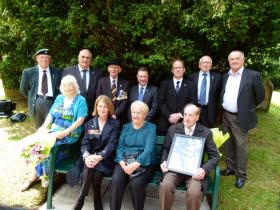 On Thursday 30 June 2016, Hollis family members, the Mayor of Redcar & Cleveland Council Barry Hunt, members of the Green Howards Regiment, the local community and Freemasons from Guisborough gathered at St Cuthbert’s Church, Ormesby for the unveiling of a commemorative bench to Company Sergeant Major Hollis, the only man to receive the Victoria Cross for his Operation Overlord heroics serving with the 6th Battalion on Gold beach, Normandy on 6 June 1944.

The unveiling was the culmination of the efforts of local Ormesby shop owner and PM of Zetland Lodge 561 W Bro Andy Hill and Mrs Josie Ranson’s work in securing the £750 necessary for its purchase.
They became aware that in the 1940’s Hollis had been a resident in the area, had sang in the church choir and they hit on the idea of the bench as a fitting tribute to an extremely brave local man.
In picturesque surroundings a moving ceremony including the blessing of the bench was given by the Reverend Jennifer Croft and readings of Hollis’ life and Victoria Cross citation were given by his granddaughter Mandy Hart and Martin Eggermont respectively, a Friend of the Green Howards Museum.

The below was included in the VC citation

During the action CSM Hollis went to investigate two German pillboxes and when they were 20 yards from a pillbox, a machine-gun opened fire from the slit. CSM Hollis instantly rushed straight at the pillbox, firing his Sten gun. Jumping on top of the pillbox he recharged his magazine, threw a grenade in through the door and fired his Sten gun into it killing two Germans and taking 26 prisoners.

He then cleared several Germans from a neighbouring trench.

Later the same day in the village of Crepon, the Company and Hollis encountered and attacked a field gun and crew armed with Spandaus at 100 yards range. CSM Hollis pushed right forward to engage the gun with a PIAT anti-tank gun from a house at 50 yards range. He was observed by a sniper who fired and grazed his right cheek and at the same moment the gun swung round and fired at point blank range into the house. To avoid the falling masonry CSM Hollis moved his party to an alternative position. Two of the enemy gun crew had by this time been killed and the gun was destroyed shortly afterwards.
CSM Hollis then learned that two of his men had been left behind stating to his commanding officer, “I took them in. I will try to get them out.”

In full view of the enemy who were continually firing at him, he went forward alone using a Bren gun to distract their attention from the other men. Hollis carefully observed the enemy’s pattern of behaviour and threw a grenade at the most opportune moment. Unfortunately, he had forgotten to prime the grenade but the enemy did not know this and kept their heads down waiting for it to explode. By the time they realised their mistake Hollis was on top of them and had shot them.
Under cover of his diversion, the two men were able to get back.

Wherever the fighting was heaviest CSM Hollis appeared and, in the course of a magnificent day’s work, he displayed the utmost gallantry and on two separate occasions his courage and initiative prevented the enemy from holding up the advance at critical stages.

It was largely through his heroism and resource that the Company’s objectives were gained and casualties were not heavier and by his own bravery he saved the lives of many of his men.

He was decorated by King George VI at an investiture held in Buckingham Palace on 10 October 1944 and was the only one of 160,000 allied troops that day to receive the Victoria Cross
In later life he worked in various occupations including being a licensee at the Albion public house in North Ormesby, it later being renamed as “The Green Howard”. Sadly neither it or Stan survive as he died on 8 February 1972 and was buried in Acklam Cemetery, Middlesbrough where he rests with his beloved wife Alice.

Following the ceremony all gathered at a local club for refreshments and a further £164 was raised by Bro Andy selling commemorative Green Howards pens, the proceeds being halved between the Church and Masonic funds.