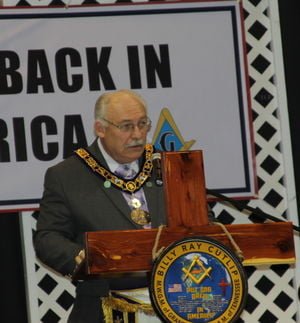 Photo Special to the Sun

Greeneville Lodge No. 3, F&AM, the oldest Masonic lodge in the state, is celebrating a first in its 215-year history. Lodge member Billy Ray Cutlip has been elected the Most Worshipful Grand Master of Free & Accepted Masons of Tennessee, according to a news release.

Freemasonry came to Greeneville in 1801, and many local leaders have been members of Greeneville Lodge No. 3 throughout the years — including congressmen, senators, and even President Andrew Johnson — but Cutlip is the first member to have been elected Grand Master of Tennessee.

Cutlip has been crisscrossing the state since his election at the Masons’ annual communication in March in Nashville.

He was honored by his local lodge Saturday, May 28, at a “homecoming” held at First Baptist Church in Greeneville.

About 200 Masons from across Tennessee and other Southeastern states, their families and friends welcomed Cutlip, his wife, Debra, and their children and grandchildren.

Cutlip is the leading figure among more than 40,000 Freemasons in Tennessee, according to a news release.

The homecoming was one of more than two-dozen district meetings Cutlip and the other Grand Officers have attended across the state.

The meetings are designed to give Tennessee Freemasons a chance to meet the Grand Master and Grand Officers and to give the dignitaries a chance to update the members on the state and goals of the fraternity.

Freemasonry is the oldest fraternity in the world. Later this month, it will celebrate the 299th anniversary of its official formation.

Several presentations were made to the Grand Master.

Greeneville Lodge No. 3 presented Cutlip with his official portrait, which now hangs in the lodge, a check to help cover his expenses and a handmade quilt.

Debra Cutlip, the First Lady of Freemasonry in Tennessee, was presented with red roses.

Cutlip’s theme for his term as Grand Master is “Put God Back in America.”

The banquet facility at First Baptist was decorated in red, white and blue; a banner featuring the Grand Master’s theme hung behind him on the stage while he addressed the crowd; and members of Greeneville Commandery No. 43, in full uniform, presented the U.S. flag.

The Scott Family singers sang the national anthem to open the ceremonies and entertained the crowd with a gospel performance following the catered meal.

The homecoming was the culmination of a lot of work and effort by a number of people, especially Royce Peterson, who coordinated the homecoming and presented the Grand Master with an antique pocket watch to commemorate his term in office, and Peterson’s wife, Sandra, who crafted the quilt for Cutlip.