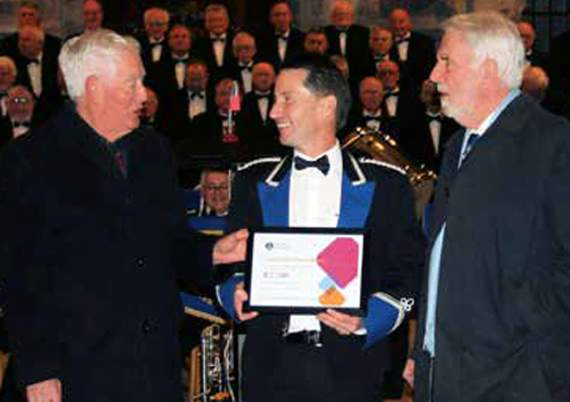 The Freemasons of North Pembrokeshire have once again recognised and rewarded Goodwick Brass Band’s dedication to providing musical opportunities for the community.

In the band’s annual gala concert at St David’s Cathedral, the band was presented with a plaque marking this year’s grant of £2,500 bringing the total support since 2009 to £20,000.

“It enables the band to purchase instruments costing anything up to £12,000, music parts, contest travel and free tuition opportunities for all standards of musician.

“Altogether, the various Goodwick bands number over 100 musicians of all age groups,” he said.

The concert programme delighted the packed audience with not only the band’s familiar and award-winning sound but also the superb choral work of the world famous Morriston Orpheus Choir and, this year, the fascinating sounds of traditional Irish folk music from Offbeat, a youthful and energetic group discovered on the band’s recent tour of Ireland.

In the absence of musical director Matthew Jenkins, the Goodwick band was conducted by this year’s newly-crowned Welsh conductor of the Year, Robin Hackett, fresh from winning the South East Wales Second Section brass band title with his own band, Newport Borough.