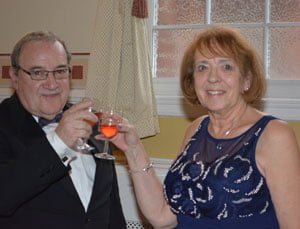 The WM of the Birchwood Lodge No 8861 John Geering, on his own behalf and on behalf of the principal guest, his lady Lynn, welcomed everyone to the lodge’s ladies’ evening. He expressed their delight in being able to welcome so many members, friends and family to such a favourable occasion, wishing everyone a pleasurable evening.

John and Lynn welcomed everyone

The evening was a formal social function of John’s year in office as WM, and being a major event in the annual calendar of the lodge was held at Warrington Masonic Hall.

The event was very well supported by just over 60 members and guests. The evening was well organised and planned, with attention to detail being observed. The formal proceedings were under the control of David Finlay, the acting director of ceremonies.

Grace was offered by the acting chaplain Bob Williams and was followed by a superb four course banquet consisting of warm smoked salmon fish tart with lightly dressed leaves, roast beef and Yorkshire pudding with roast potatoes and seasonal vegetables, a brandy snap basket with vanilla ice cream and warm berries, followed by a premier selection of English and Continental cheeses with biscuits, all served with an excellent selection of premium red and white wines. Tea or coffee completed the meal.

Many complimentary remarks about the quality of food and the service of the hall’s staff were offered. Bob returned thanks and John proposed the loyal toast. 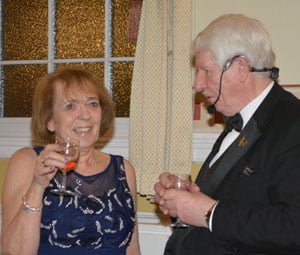 Lynn (left) being toasted by Norman.

Chris Gleave (group vice chairman), proposed the toast to the ladies, commenting that he felt honoured to propose the toast to the ladies and particularly because he had worked with Lynn for several years. He added that she was a delightful person and dedicated to her work. He continued by providing a short history of Lynn’s dedication and commitment to her sometimes very demanding work. He thanked all the ladies present for their help and support over the last 12 months.

The ladies’ song was sung by Norman Pritchard accompanied by Keith Dickinson. They continued with a few extra songs and Norman distributed long stem roses to various ladies.

Lynn responded to the toast on behalf of all the ladies. She thanked all for their attendance and for the help and assistance in the organisation both before and during the evening.  Ladies’ gifts were then distributed and table prizes drawn. John presented Lynn with a present from the members of the lodge. He then announced that a raffle would be held and the proceeds would go to charity. Many prizes were drawn and distributed. The final total from the raffle was £185 and John thanked everyone for their generosity.

David Finlay then handed control over to ‘Charlie Mack’ the entertainer and dancing continued until late. The event was a very successful evening with good company and good food in a great atmosphere. 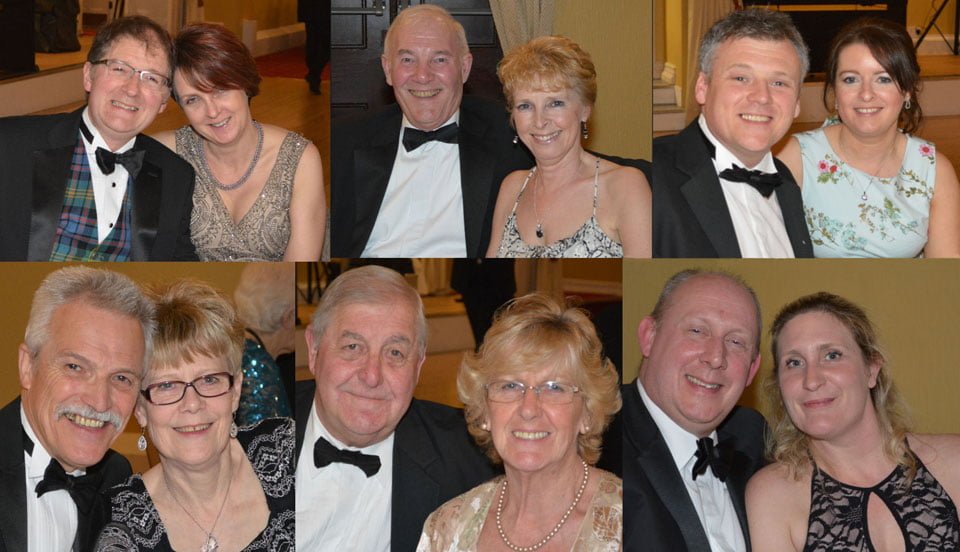