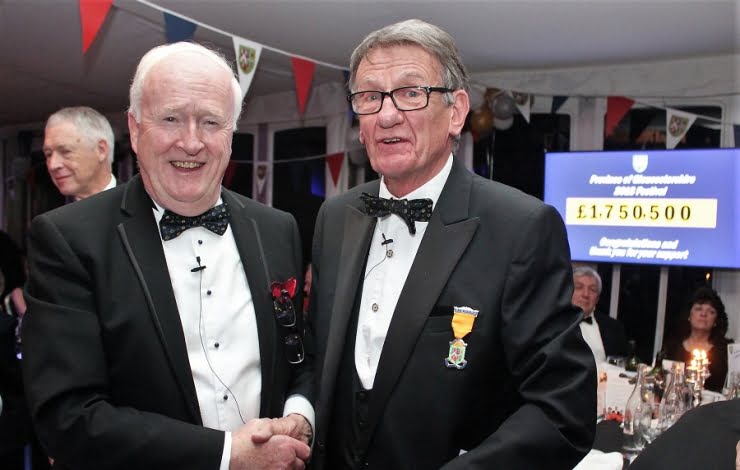 ‘A force for good,’ was how Dame Janet Trotter, Lord Lieutenant for Gloucestershire, described Freemasons in the county and the wider area

Dame Janet was responding to the announcement at a celebratory gala at the DeVere Cotswolds Water Park Hotel that both national and local charities would be benefitting to the tune of £1.75 million, following a five year fund-raising drive by Gloucestershire Freemasons.

‘This money goes beyond masonic charities,’ said the Provincial Grand Master for Gloucestershire, Tim Henderson-Ross. ‘It will benefit the wider Gloucestershire community, hopefully helping to dispel the myth that Freemasons only look after themselves.’

‘Gloucestershire masons have risen to the challenge, delivering a tremendous result. In so doing, you will help those less fortunate than ourselves; spreading a little happiness and, all being well, leaving the world better than we found it.’

To mark her retirement from office, the Provincial Grand Master presented the Lord Lieutenant with a cheque for £5,000, destined for a charity of her choice. Dame Janet disclosed she was currently championing a new charity – the Cyber Trust – which seeks to protect those most at risk in the area of personal cyber and online security.

Holding the cheque aloft, she said: ‘I promise this will be positively used; particularly in the county’s schools.’