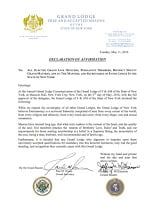 A vote was taken at the annual meeting of the Grand Lodge of New York last week on the question of how to proceed with the situation in Georgia and Tennessee. It was voted that the Grand Lodge as a deliberative body, through their new Grand Master, MW Jeffrey M. Williamson, would first issue a statement concerning the sexual orientation rules of those states before making determination concerning  possible withdrawal of Masonic amity.  (The vote was a narrow one, and I have been told that those voting against the decision actually wanted to break with GA and TN, and simply felt the statement wasn’t enough.) The statement was issued today. Click the image above to enlarge it.

It reads in part:

While we respect the sovereignty of all other Grand Lodges, the Grand Lodge of New York believes Freemasonry is a universal fraternity comprised of men from every corner of the world; from every religion and ethnicity; from every creed and color; from every shape, size and sexual orientation.

Masons have learned long ago, that what truly matters is the content of the heart, and the quality of the soul. Our members practice the  tenants [sic] of Brotherly Love, Relief and Truth, and our requirements for those seeking membership is a belief in a Supreme Being, the immortality of the soul, being a man, freeborn, well recommended and of lawful age.

Furthermore, it is decided that any Grand Lodge who digresses or impedes upon these universally accepted qualifications for candidacy into this honored institution, may risk the good standing  and recognition they currently enjoy with this Grand Lodge.