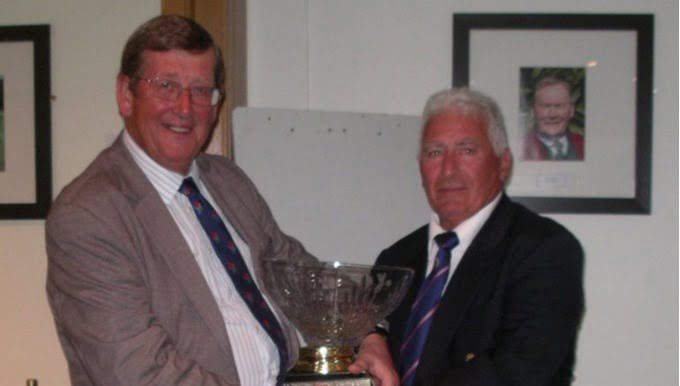 On 23rd June, a day of very unsettled weather, on a wet but otherwise immaculately presented Tenterden Golf Course, Peter Shardlow regained the title he last won in 2013 of East Kent Provincial golfing champion winning the Geoffrey Gordon Dearing Bowl. Peter was the only competitor on the day to better the course par, with Daren Horne finishing runner-up.

However, the unexpected drama of the day played out on the long 12th hole where, with an “extra weetabix of a tee shot”, Provincial Grand Master Geoffrey Dearing, competing in his own tournament, turned the difficult par 4 into a potentially easy par 3. Tension mounted. Just a simple chip and a short putt was all that was required for an historic birdie. Would his nerves hold? Would his knees stop knocking? Only those who were there know the answers to these questions! Teeing-off next, Chris Metherell is alleged to have put his driver away deciding it was in his own best interests not to try to deprive the Provincial Grand Master of the prize for the longest drive – not that he could hit the ball that far anyway!

Peter Rodd presenting the PGM with the longest drive prize

At the post-tournament dinner, on being proclaimed East Kent Provincial golf champion and receiving the Geoffrey Gordon Dearing Bowl from the Provincial Grand Master, Peter Shardlow said he was delighted to win the trophy again and thanked the organisers for putting on an excellent competition.

Assistant Provincial Grand Master and East Kent Provincial Golfing Association Captain Peter Rodd presented the runner-up trophy to Daren Horne; “nearest the pin” prizes to Jeremy Parkin and Chris Metherell; and the prize for the “longest drive” to Geoffrey Dearing. On receiving his prize, the Provincial Grand Master  said he hoped someone would tell both Roger Odd (whose golfing achievements are well documented) and Jonathan Winpenny of his success!