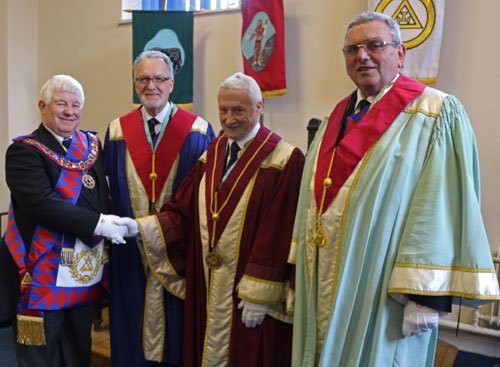 At the installation meeting of Royal Preston Chapter No 333 the chapter companions were honoured by the presence of Deputy Grand Superintendent Danny Jones as the principal guest. He was accompanied by Assistant to the Provincial Grand Principals Ian Cuerden, Preston Group Chairman Steve Bolton and Provincial Deputy Grand Director of Ceremonies Paul Hesketh. They were supported by grand officers, Joe Collier, Stan Rigby and David Winder and acting Provincial grand officer David Caldecott.

Prior to the start of the installation ceremony and following a successful ballot, the chapter had the pleasure of awarding honorary membership to Joe Collier, a diligent and well respected member of many years standing who recently celebrated 50 years in the Royal Arch.

David was presented for installation as third principal by Mike Jones with Trevor and Geoff, in turn, being presented for installation as the second and first principals by Trevor Hampton. The scripture readings were presented by David Caldecott, Patrick Bracewell and Vic Parker respectively with all the associated prayers being delivered by Mel Johnson. The scarlet, purple and blue robe addresses were given by Simon Worswick, Peter Donnelly and Vic Parker respectively all of whom made first-class presentations.

At the conclusion of the installation ceremony, Danny brought the greetings and congratulations of the Grand Superintendent Tony Harrison, commenting that had he been present he would not have witnessed a finer ceremony as had just taken place. On Tony’s behalf he congratulated Geoff on attaining the first principal’s chair, wishing him well for his year in office. He went on to congratulate Howard for his excellent work in installing his successor and in turn congratulated all those companions who had a part to play in the evening’s ceremony, in particular mentioning the DC Trevor Hampton for his expert direction of the ceremony. 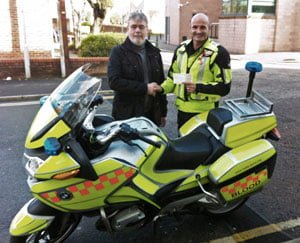 The proceedings in the chapter were brought to a close with a flawless delivery of the valedictory address given by Patrick Bracewell that was greatly appreciated by the companions present.

Later in the evening, in response to the toast to the grand officers, Danny said he was pleased to have the company of Ian Cuerden, thanking him for all he does for the Province. He thanked all the grand officers for their presence, specifically congratulating Joe Collier on his honorary membership of the chapter. In a similar vein he acknowledged the valued support of the Preston Group Chairman Steve Bolton, PrDGDC Paul Hesketh and acting officer David Caldecott.

Turning to the Provincial Grand Chapter meeting, Danny congratulated all those who were receiving appointments and promotions in the Royal Arch, particularly mentioning the name of chapter member, Peter Cornwell. He urged the companions to support the Grand Superintendent by attending the meeting and also, as members of the Craft, to continue their support by attendance at the future Provincial Grand Lodge meeting.

Danny continued on his own behalf, congratulating the chapter companions for what had been an excellent ceremony where every part of it was well done. He congratulated the three principals on their installation into their respective chairs wishing them well for their year in office. He mentioned the excellent work of the outgoing principal Howard Linaker, saying the quality of the ritual ensures the chapter will continue to go from strength to strength in attracting new members.

Moving on, Danny mentioned the outcome of the ‘Talking Heads’ presentation that had previously taken place at the September meeting of Royal Preston Lodge No 333. As a result of the presentation, two brethren are now members of the Royal Arch in this chapter. As a means of further cultivating interest in the Royal Arch, he informed the companions that there is to be a further ‘Talking Heads’ presentation to be made at the November meeting of Festival Lodge No 8123. He went on to encourage chapters to consider adopting sections of the enhanced ritual demonstrations that had taken place in the Province. In this way, the exaltation ceremony will be better understood by candidates as they progress through the ceremony. He reminded them that ceremonies done well attract visitors.

Danny concluded by thanking the chapter companions for the very generous charitable donations made earlier in the evening, acknowledging that members had already made donations through their own Craft lodges.

A few days after the installation Howard had the pleasure of presenting Scott Miller, Trustee and Vice Chairman of North West Blood Bikes (Lancashire and Lakes), with the cheque for £250 in support of their vital work.

North West Blood Bikes provide a free but professional voluntary out of hour’s service to local NHS hospitals by carrying urgent and emergency blood, platelets, laboratory samples, donor breast milk and patient notes between hospitals, a service that began in May 2012 and has, to date, undertaken over 21,000 successful call-outs.