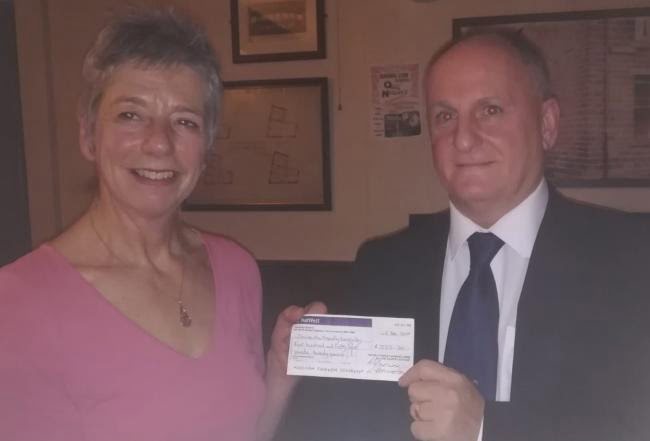 FREEMASONS played the role of Santa this month (Dec) by presenting a substantial sum to the Dementia Friendly Keighley (DFK) group.

Before his death, a now deceased member of the Masons, Arnold Simpson, had asked for half the collection at his funeral was to be presented to DFK to support its work in Keighley district.

Keighley Masonic Lodge responded by matching this amount from its own funds, to ensure a cheque for over £500 was presented to DFK by worshipful master Will Waddell.

A DFK spokesman said: “Mr Waddell was supported by many of the lodge members who listened to a short address about the charity, its growth and the services it provides, given by dementia friends founder member and trustee Maggie Marsden.

“Mr Waddell said the lodge now hopes to be able to give more direct support to ‘this super organisation.’

“Maggie was delighted to receive the cheque on behalf of DFK, and is looking forward to collaborating with the lodge on fundraising and awareness raising events in the New Year.”

DFK’s social group meets at the Brown Cow, in West Lane, every Thursday evening from 6.30pm. The group was originally established to reach out to younger people with dementia but is open to all.