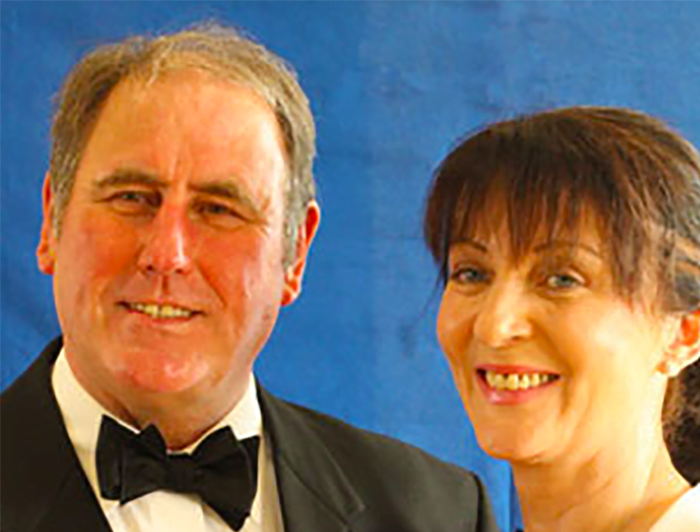 On a hot summers evening brethren from the newly amalgamated Ormskirk and Bootle Group, accompanied with their wives and many guests attended the FROTH Gala Cabaret Dinner and Dance, which Bootle Group has been running annually for the last 20 years. This year the event was held at the magnificent surroundings of the West Lancashire Golf Club.

Frank Umbers and his wife Cathy.

FROTH, which stands for ‘Friends of the Hall’, is run by the members of the group who meet at Litherland Masonic Hall and was originally set up to help bring the lodges, chapters and other Masonic Orders together, where everyone can enjoy each other’s company in social activities and functions, with a common cause to help raise funds for the welfare of their Masonic home. FROTH over the years has helped with many contributions towards the cost of the furniture and decorations for the hall, to name a few.

In attendance for the evening were Ormskirk and Bootle Group Chairman Frank Umbers, who was accompanied by his wife Cathy, and John Marsden, Bootle Group Vice Chairman and his wife Pauline.

The evening commenced with everyone meeting up in the bar area and on the clubhouse balcony, for their pre-dinner drinks, before being called by the evening’s master of ceremonies Don Fraser of Crosby Lodge No 3714  into the dining room to be seated for their meals. Once everyone was comfortable Graham Chambers, the FROTH Chairman, warmly welcomed everyone to the evening saying that he hoped the guests would enjoy the evening and the entertainment. Graham then handed over to Pauline Marsden who gave Grace, before the meal was served. During the meal the diners were entertained to a musical accompaniment supplied by DJ Eric Menzies.

A splendid five course meal was served, with prawn cocktail for the starter; this was followed by beef with roasted peppers, roast potatoes and gravy for the main course. For desert a strawberry Pavlova was served, which was then followed with a cheese board and biscuits and finally tea and coffee.

Graham Chambers and his wife Anne.

Following the meal, the return of thanks was given by Peter Kelly of Bootle Pilgrim Lodge No 1473, with the loyal toast following. Graham then introduced Cherie Jade the entertainer for the evening. Cherie is a Diana Ross and Motown tribute act performer; she had come very highly recommended and looked and sounded like the real lady herself.

Cherie sang many songs during her two sets including such hits as ‘Baby Love’, ‘Happening’ and ‘I Will Survive’ to name a few, her act was really enjoyed and well received, with the dance floor filling up almost instantly when Cherie began to sing.

During a short break in the evening’s entertainment a raffle was held with many prizes to be won. Once the raffle was completed Graham proceeded to thank everyone for their support and for attending the night, Graham also thanked those who had helped to organise and had donated their time to help put on and run the Cabaret Dinner and Dance.

Graham then handed over again to Cherie for the second half of her act, with the dance floor again filling up instantly. Once Cherie finished her act she received a gratifying applause from the audience, before handing over to Eric who continued with an excellent disco. The music and entertainment carried on until midnight when the happy revellers left for their homes after a good time was had by all. On the night around £330 was raised for the hall.

Tasters of the evening.