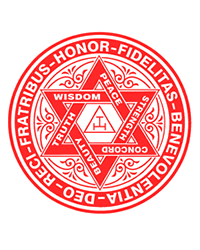 Brethren are often puzzled about the relationship between the three degrees of Craft masonry and the transition to something different. Surely the three Degrees are sufficient in themselves. They move, one after the other, through progressive stages of life. There give much to reflect on.

They form a recognisable sequence with which we can all identify. They give a complete poetic meaning to our lives by the aid of symbols, encourage us at every meeting to do better, and leave us with a homely philosophy based on faithfulness—fidelity—and the spreading of happiness and love. What more could possibly be needed? Wherefore this Royal Arch? In what sense can it be the completion of pure ancient freemasonry?

On one level, on the story level, the Third degree does not provide the ultimate. We do not receive the genuine secrets of a Master Mason. We are left with ‘substituted secrets’. They are provided until ‘time and circumstance’ restore the genuine. At the story level, the ‘genuine secrets’ (in several parts) are discovered within the Royal Arch. Are they worth finding? Well, that is a judgment best left to you. You will never know until you penetrate beyond the veil. The veil? What veil? Is this ‘the mysterious veil which the light of human reason cannot penetrate unless assisted by that Light which is from above’? Well, progress, contemplate and feel. It may be.

It is unfortunate, in this sense, that in England (other than in Bristol), the intervening ceremonies connected with the veil have been shut down. This was done 150 years ago. We now have no sense of barriers and awe before we approach the place where the essence of the Royal Arch is revealed. Nor, except in a very few survivals, is a Chapter of the Royal Arch any longer opened in secret by the Principal Officers before the Companions are admitted. The mystique has been removed.

The sense of specialness and effort has been largely eroded. Nevertheless, as any Royal Arch Companion will tell you, the circumstances within the Chapter are quite strange. They bear almost no resemblance to the conventional format of a lodge meeting. They are disorientating. They are of a different order. They are, indeed, at the deepest level, in a different plane of existence. At the story level, the scene is set in terrestrial terms.

Do you need to know it? I suggest that it might be satisfying to do so. Is it meaningful? That ultimately depends on you. If you feel complete with the knowledge of the world provided by the three Craft degrees and a substituted secret then you have trodden as far as many get. But it must be asked, is this world and its square moral virtues all?

How infinite and pure is the life beyond the veil? How spiritual are you? Of course, to find the genuine secret you may need to look beyond the story. Nothing is missing except the key. The ideas presented herein have been reproduced with the kind permission of: WBro John Acaster