On a warm spring evening the fabulous Gateway Banqueting Suite at Lancaster’s University of Cumbria again provided the venue for another well supported Group Ball, where brethren and their partners enjoyed an excellent meal before dancing to the wonderful Steve Silver until midnight.

A magnificent scenic setting provides the backdrop to the evening’s entertainment at the Group Ball.

On arrival, each guest was offered a glass of wine and once everybody had taken their seats for dinner, the director of ceremonies for the evening Keith Kemp announced the entrance of the Lancaster and District Group Chairman Jim Wilson, accompanied by Mrs Pat Parkinson, the group vice chairman Neil McGill with his wife Lorraine and the group secretary Scott Devine with his wife Karen.

Jim Wilson was delighted to welcome everyone to what has become the highlight of the group’s social calendar and thanked both Steve Plevey for his hard work in organising another successful event and Keith Kemp for making sure the evening flowed smoothly. The ‘whisky draw’ and the general raffle were again well supported, together raising £840. 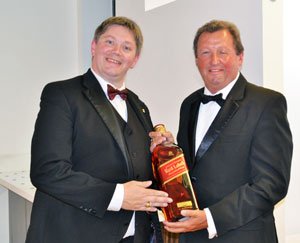 In the raffle the star prizes were an ASUS ZenPad 16GB tablet which was won by Keith Kemp and an Amazon Echo Dot won by Stephen Dougherty of the City of Lancaster Lodge No 281. In a twist of fate, one of the other magnificent prizes on offer, an afternoon tea for two people at the Longlands Hotel, Tewitfield, was won by the hotel’s owner Barry Robinson, much to the amusement of everyone present.

The star prize in the whisky draw was a gallon of Johnnie Walker Red Label whisky which was won by Paul Dent, the worshipful master of Torrisholme Lodge No 5245.

It can be said that the whole evening was a great advertisement for the group, in keeping with our Provincial Grand Master’s refrain of ‘enjoying your Masonry’.