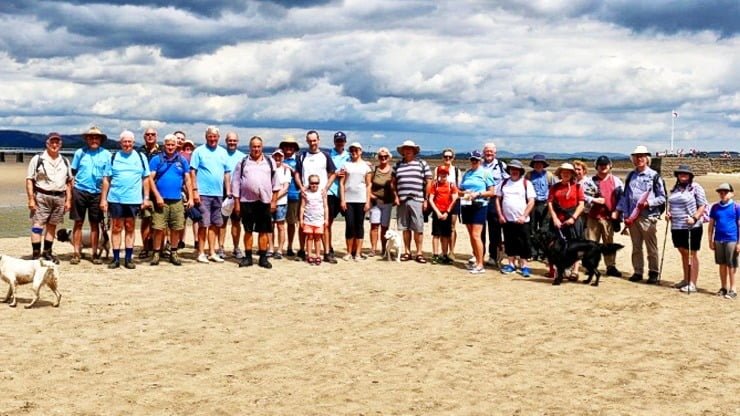 A group of intrepid Freemasons in the Province of Cumberland and Westmorland, supported by their family as well as their dogs, completed the Annual ‘Cross Bay Walk’, to raise money for the charity Northwest Blood Bikes

45 people signed up for the event, which was organised by Freemason Peter Caunce and his wife Debi. On an exceptionally hot and humid day on 8th July 2018, everyone completed the world famous trek across Morecambe Bay, led by The Queen’s Guide to the Sands – the royally appointed guide to crossing the sands of Morecambe Bay – Cedric Robinson MBE.

Leading from the front and one of the first to finish was the Provincial Grand Master Norman Thompson, who afterwards said: ‘That was one of the toughest walks across the Bay I’ve done, but it’s been very worthwhile, especially in the knowledge that the Blood Bikes charity will benefit.’

This is the sixth year that Peter and Debi have organised the walk for the Province, helping them to raise in excess of £12,000 during that period for various local charities.

This year over £1,500 has been pledged so far for Northwest Blood Bikes, which may be used towards purchasing a motorcycle.