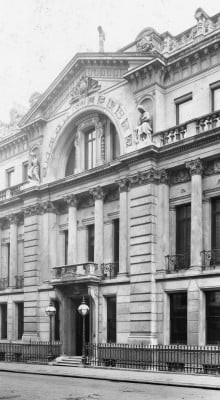 One of the more unusual collections within the Grand Lodge archives relates to the Freemasons’ Tontine which was one of the ways in which funds were raised to build the first Freemasons Hall in the 1770s.

Tontines are now illegal in most countries including Britain (possibly because they encouraged the murder of beneficiaries!), in the 1700s they were widely used. So what is a tontine? The Oxford English Dictionary defines the word tontine as meaning: A financial scheme by which the subscribers to a loan or common fund receive each an annuity during his life, which increases as their number is diminished by death, till the last survivor enjoys the whole income.

The word itself derives from the name of the man credited with inventing the idea, Lorenzo de Tonti. In 1653 Tonti, an Italian who established a political career for himself in France, presented to the French king, Louis XIV, a scheme to raise money by inviting contributions from citizens who would receive a share of the fund’s income whilst they were still alive. Once all contributors were dead the capital would revert to the state. He described the idea as “a gold mine for the king … a treasure hidden away in the realm”. The scheme was not taken forward by the French parliament until 1689, a few years after Tonti’s death in 1684, the resulting tontine raising 3.5 million livres.

England’s first tontine was organised by the Government in 1693. It had limited success as only 10% of the target amount was raised. However, tontines continued to be used throughout the 1700s, less so by the Government but increasingly by organisations, often to raise capital to fund building projects. The evidence of this is demonstrated through the number of Tontine Streets and Tontine Hotels that are still in existence today.

The suggestion of raising money to fund the building of the first Freemasons’ Hall through a tontine was considered at a meeting at the Thatched House Tavern on 16 February 1775.

At a meeting of Grand Lodge on 22 February the scheme “which would immediately raise a sum of £5,000 to carry into execution the design of the Society in building a Hall by granting annuities for lives” was formally approved.

John Allen, Provincial Grand Master for Lancashire, prepared “Proposals” for the regulation of the tontine, which were later printed “for the use of the subscribers”.

In the Freemasons’ Tontine there were 100 shares of £50 each. (The modern equivalent in terms of spending power would be £3,000).

There were no problems finding subscribers, indeed the minutes of the meeting of 16 February (before the scheme had been officially approved by Grand Lodge) record that after the resolution was passed “25 lives [were] subscribed for”.

Subscription to the tontine required four quarterly payments of £12 10 shillings at or before Midsummer (24 June), Michaelmas (29 September) and Christmas 1775 and Lady Day 1776 (25 March). Each subscriber was allocated a share number to help with the administration and they were issued with a parchment Freemasons’ Tontine share certificate.

The printed list of subscribers to the Freemasons’ Tontine shows that prominent Freemasons of the time purchased shares including Lord Petre, the Grand Master, Henry, 5th Duke of Beaufort, who had been Grand Master 1767-71 and HRH the Duke of Cumberland, who became Grand Master in 1782.

The subscribers to the tontine were required to nominate an individual (a nominee) on whose life the share was staked. They could nominate themselves or another individual of any age. The total annual dividend of £250 (5% of £5,000) was split amongst the subscribers as long as their nominee was alive.

As the number of nominees fell through death, the £250 was divided amongst this smaller number of qualifying subscribers until, finally, one subscriber received the full £250 dividend annually until the death of their nominee. In an age when life expectancy was uncertain, subscribing to a tontine was a risky investment. In one sense, a tontine was an early form of life insurance.

It was common in tontines for the subscribers to name their children or young relations as nominees. Through nominating an individual of a younger age there was a good probability that their nominee would survive longer to benefit from the tontine, in the Freemasons’ Tontine 39 of the nominees were aged 10 or younger.

The youngest nominee was Rebecca Lara, just nine months old when her father, Joshua Lara, nominated her. Rebecca died in 1847, aged 72, making her one of the longest surviving nominees. However, nominating a young child was still a gamble at a time of relatively high infant mortality.

Francis Case, nominated by Dr Isaac Sequiera of Mark Lane, East London, was recorded as being 15 months old on the list of subscribers and nominees printed in 1775. His death two years later, on 24 December 1777, is noted in the Tontine Register.

Subscribers did not have to know their nominees personally. For example, four different subscribers chose the Prince of Wales, later George IV, as their nominee. He was 14 at the time and was nominated not only by his uncle, the Duke of Cumberland, but also by Charles Taylor of Villiers Street, Junior Grand Warden in 1769, James Galloway, Junior Grand Warden in 1781 and Thomas Sandby, who designed the first Freemasons’ Hall. Perhaps they believed that as heir to the throne he would be well cared for by physicians and thus live to a good age.
This he proved to do, dying aged 68, despite his extravagant lifestyle, at a time when the average life expectancy was around 40.

Subscribers to the scheme came to be known more commonly as “proprietors”, this being the more accurate term, as the people who initially subscribed to the tontine did not always remain involved. Often, the subscriber would die before the nominee. In this circumstance, the share in the tontine could be bequeathed to another individual in the subscriber’s will.

Frequently a subscriber would leave their tontine share to their nominee, so that the nominee became the proprietor of the share on their own life. The proposals for the scheme state that subscribers were permitted to “assign or transfer all, or any part of his interest therein.”

However, some shares in the tontine were actually sold. One 1793 document from the Freemasons’ Tontine archives advertises the sale by auction of two shares. One share was on the life of a “healthy gentleman aged 33 years, or thereabouts”, the other share on the life of a male, 23. Perhaps, surprisingly, the share staked on the life of the older man sold for £55, which was £5 more than that of the younger man.

Along with the proprietors and the nominees a number of Tontine Trustees were also appointed “for securing in the most effectual manner the due payment of the … yearly interest of £250 for the benefit of the subscribers.”
Proprietors of shares only received their twice-yearly dividends once they had proved that their nominee was still alive. A visit by the nominee to the Tontine Committee treasurer or secretary usually confirmed this. Alternatively proprietors could send certificates written by a local official such as a Justice of the Peace or church minister as proof that their nominee was still alive. Nevertheless, it must have been difficult at times to verify that nominees were still alive, especially if they moved overseas.

Where any dividend or dividends were unclaimed for a period of 12 months or more, a letter was sent to the proprietor requiring him or her to apply for payment and to provide proof of the existence of their nominee. If the person could not be located then a notice was inserted in the London Gazette and in another public newspaper (the expense of which was deducted from the accrued dividend amount).

Six months were allowed for the production of proof, after which the accrued amount would be divided and paid equally to the remaining proprietors. In practice, several years could pass without the dividend being forfeited.
The first year’s dividend in the tontine was paid at Midsummer 1776. Proprietors received £2 10s (worth around £158 today). Subsequent dividends were paid in half yearly instalments. Ten years (and a few deaths) later, proprietors received an annual total of £2 13s 4d per share. In 1806 – 30 years after the beginning of the tontine – proprietors were receiving £4 6s 1d for each share they possessed. By 1816 this had risen to £4 10s 10d.

The last extant tontine dividend book records receipts of payments up to the Christmas of 1845. At this time there were only five nominees still in existence. With only five proprietors sharing the £125 half yearly interest, they each received a dividend payment of £25, the equivalent of just over £1,000 today. The final survivor of the tontine was Anne Ellis. She was just two years old when her father, Sir Peter Parker, had nominated her. Parker had a successful naval career and was a great friend and patron of Horatio Nelson. As the senior naval officer, he was appointed chief mourner at Nelson’s funeral in 1805. He was a prominent Freemason, Senior Grand Warden in 1772 and Deputy Grand Master 1787-1811.

The death of Ann Ellis, aged 89 in 1862, meant the end of the Freemasons’ Tontine. Her death was reported at Grand Lodge at a time when they were looking to rebuild the site once more.

So was the Freemasons’ Tontine a success? It raised a large sum of money in a very short time, but proved an expensive form of finance – over the 87 years the scheme was in operation, Grand Lodge paid £21,750 of interest.