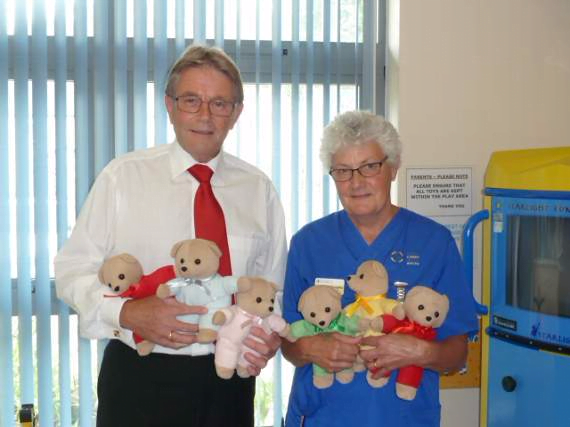 Freemasons from West Wales will be hosting their own teddy bears’ picnic as part of celebrations to mark 300 years of Freemasonry while raising awareness of the excellent work of one of its most important Masonic charitable initiatives, the Teddies for Loving Care (TLC) Appeal.

Families visiting Tenby Harbour on the afternoon of Sunday, August 13, will be welcome to drop by for their children to have some picnic goodies and a chance to win a teddy bear. It will be one of many teddy bears’ picnics, as well as a range of other events taking place up and down the country in 2017 as part of Freemasonry’s tercentenary year celebrations.

Stephen Hookey, Provincial Grand Master of the Masonic Province of West Wales, said: “Charity and community are at the heart of Freemasonry and I am delighted to celebrate our tercentenary year by showcasing one of our most popular and best loved charities. We have supported the TLC Appeal for 12 years and have donated over 25,000 teddies to the four hospitals within our Province.”

The teddy bears’ picnic aims to raise awareness of the work of the TLC Appeal, a scheme that has so far provided more than two million teddies to A&E departments around England and Wales. The teddies are handed by medical staff to children when they are suffering particularly from severe trauma, injury or illness. The staff use the bears to befriend the children, to reward them for being brave and in some cases to demonstrate their planned treatment.

One A&E sister said “I cannot remember how we used to cope before the teddies.” Another said: “It’s not just a teddy, it’s so much more.”

The TLC Appeal was established in 2001 by Essex Freemasons, after the wife of Ian Simpson, a Freemason, suffered a life-threatening allergic reaction. Both Ian and his wife are eternally grateful for the swift and caring attention that she received, but found the experience the most frightening of their lives and realised the similar distress children must face when visiting A&E units. Since then, Provinces across the country have taken on the task of raising awareness of the scheme and donating bears to hospitals in their local communities. The Freemasons of West Wales adopted the scheme in 2005, and the teddies have proved a popular and useful aid to hospital medical staff at Withybush (Haverfordwest), Glangwili (Carmarthen), Bronglais (Aberystwyth) and Prince Philip (Llanelli).

Steve Thurgood, TLC appeal coordinator for the Province of West Wales said: “I am so proud of the work that Freemasons have done to provide teddies to children during the most traumatic experiences of their lives. The bears really put a smile back on their faces. I hope that with our teddy bears’ picnic, we can raise the profile of the scheme and go on to help many more sick and frightened children.”

Some of the teddies have also been given to the new nurse led Walk-In Centre at Tenby Hospital.

Charity is one of Freemasonry’s fundamental values, and Masonic Provinces encourage all members to play an active role in their local communities.

The Masonic Province of West Wales provides continuous charitable support to a great many local charities, and as part of the tercentenary celebrations they recently donated an additional £45,000 to 27 different charities within the Province, including HOPE MS Therapy Centre, Pembrokeshire Young Carers, the Paul Sartori Foundation and Macmillan Nurses.

Furthermore, the United Grand Lodge of England, the governing body for Freemasonry in England, Wales, Isle of Man and the Channel Islands, gives millions of pounds every year through its own charity, the Masonic Charitable Fund (MCF), and West Wales benefited recently from this fund when a new £56,000 ambulance was presented to St. John’s Ambulance by Mr. Hookey, the Provincial Grand Master, at a special service at St. Davids Cathedral to mark the 300th anniversary of United Grand Lodge. The MCF have also provided a further £50,000 to the Province of West Wales as their Tercentenary Community Awards, which will be allocated to four nominated local charities.

The teddy bears’ picnic is open to the public and free to attend. It will be held on Sunday, August 13, at Tenby Harbour (near the church) between 1 and 5 pm, weather permitting.