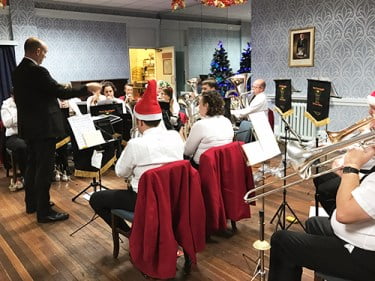 Clifton Road Annual Carol Concert was very well attended again and entertained by The Port Sunlight – Lyceum Brass. The Band started the Concert with a March entitled, ‘Jingle Bells’ which got the whole evening off to a cracking start.

The band accompanied those present who then sang, croaked or hummed along with ‘Once in Royal David’s City’ & ‘Silent Night’.
The band then played an arrangement of ‘The Christmas Song’ which was well received. 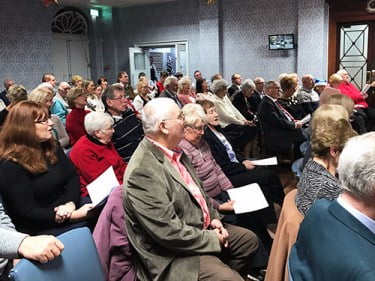 More Carols were sung and then the Band accompanied two Trumpet Players who brought us a novelty item ‘Tijuana Christmas’ which brought about a long round of applause.

The first half was ended with the band playing the tune arrangement from the Film ‘The Snowman’.

Intermission then followed with Mince Pies and Mulled Wine before more singing and Band music.

Then, surprise, surprise, Father Christmas dropped in and drew the Raffle. Not everyone was winner in the raffle but all had a great evening with the proceeds going to the TLC Appeal.