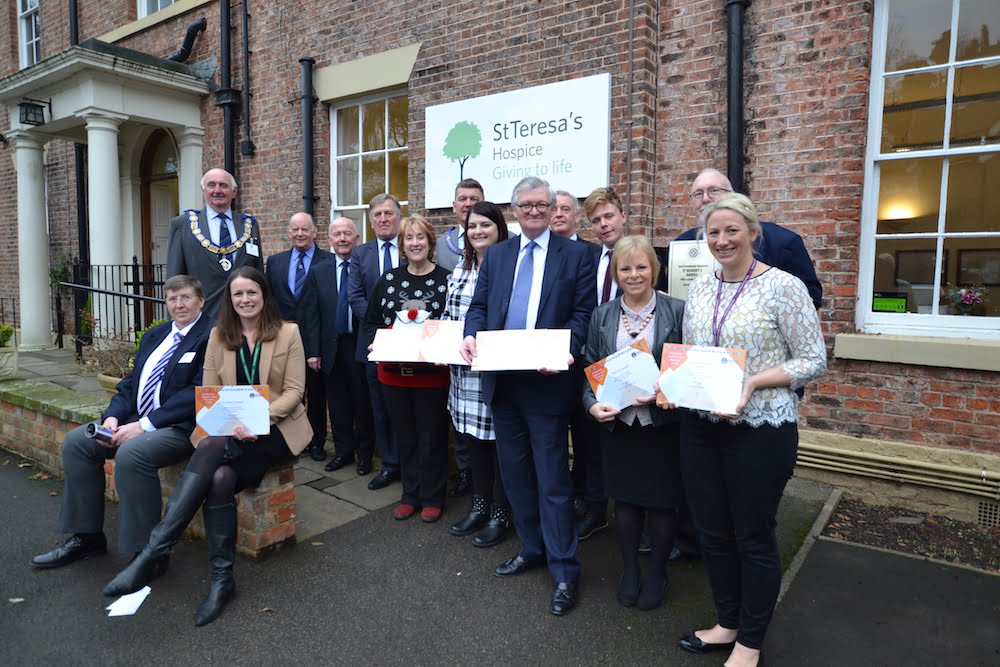 Since 1984, the Freemasons’ Grand Charity has donated nearly £12 Million towards the operating costs of hospice services across England and Wales and this year was no different as the Charity, now The Masonic Charitable Foundation once again made a difference to lives in our Province.

On 15th December 2016 representatives of eight of the hospices within our Province gathered at St Teresa’s Hospice in Darlington to meet up with our Provincial Grand Master, Norman Eric Heaviside, the Chairman of Durham Benevolence, John David Watts and other members of the Provincial Executive and Durham Benevolence to make this year’s presentations.

Talking with some of these representatives and hearing the hard work and dedication that goes into the day to day running of these vital services is completely inspirational and it is moments like this that fill us with pride to be Freemasons supporting such worthy causes.

Full List of Hospices represented and the presentations made:

St Teresa’s Hospice represented by Chief Executive Jane Bradshaw who was presented with £2,431.

Hartlepool and District Hospice, now known as Alice House Hospice was represented by Senior Fundraising Manager, Rebecca Jobson who was presented with £1,931.

Graham Leggatt-Chidgey, Freemason and Chief Executive of Butterwick House represented both Butterwick House Hospice for Babies, Children and Young Adults and Butterwick Hospice in Bishop Auckland and received £1,872 and £1,000 respectively.

St Cuthbert’s Hospice in Durham City was represented by Laura Barker, Development Team Manager who was presented with £2,274.

Gill Adams, Grants & Trusts Fundraiser for Willowburn Hospice in Lanchester was presented with £1,573.

St Clare’s Hospice in Jarrow was represented by Vanessa Middleton their Fundraising Manager was presented with £1,645.

And St Benedict’s Hospice in Sunderland were represented by Dr Martin Walker who was presented with £1,500.

In addition, Butterwick Hospice was awarded a further £1,000 presented to them by Robin Knight, Head of the Red Cross of Constantine Order in the Province of Durham and Willow Burn and St Cuthbert’s both received £500 extra from Ken Embleton on behalf of the Order of the Secret Monitor.

Each representative gave a brief outline of their particular operation and were also extremely keen to show their appreciation to The Masonic Charitable Foundation and in particular to the Freemasons of the Province of Durham.