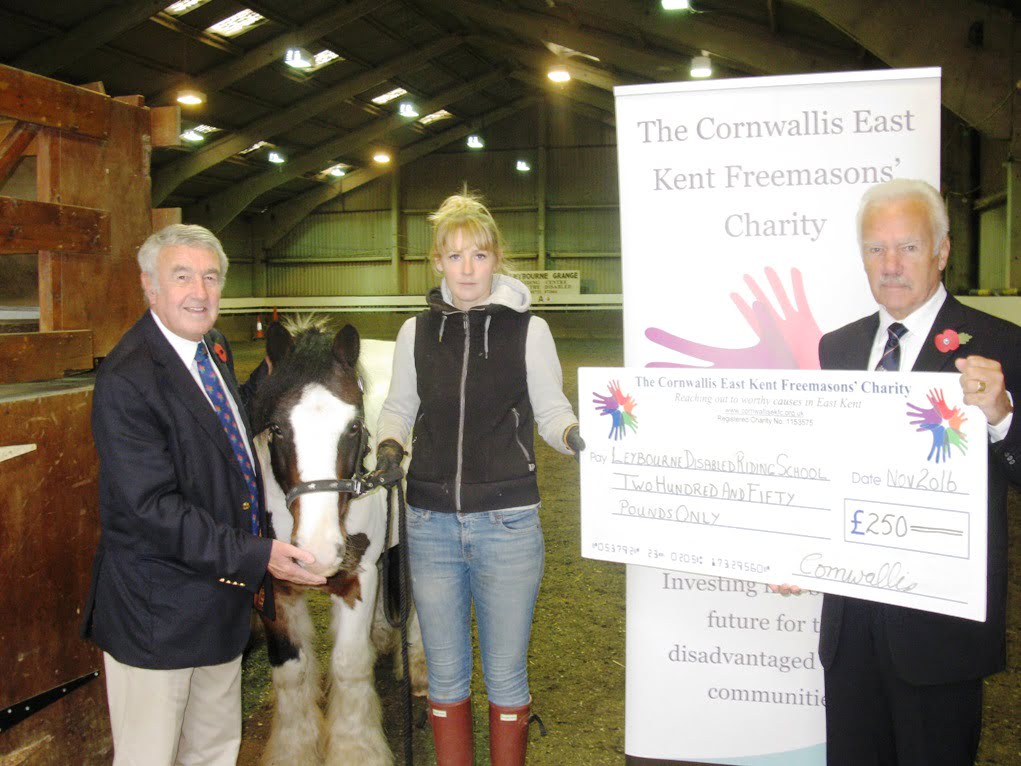 After receiving £300 from Freemasons in and around the Maidstone area in August 2016, the Leybourne Grange Riding School for the Disabled were surprised to receive a further £250 of matched funding from The Cornwallis East Kent Freemasons’ Charity.

The riding school caters for disabled youngsters and the centre relies entirely on voluntary contributions. It was founded in the mid 1970’s as part of Leybourne Grange Hospital. When the hospital withdrew from the site in late 1992, it was formed into a limited company – “Leybourne Grange Riding Centre for the Disabled” – thus enabling the riding centre to continue to provide recreational and therapeutic riding sessions.

The centre has twenty-eight ponies, three of whom are “retired” and to maintain a total of twenty-five working ponies, replacements with the correct temperament can cost upwards of four thousand pounds each.

The photo shows Sasha, one of the riding school managers, receiving the cheque from Dennis Capeling, of the Brothers of Birchington Lodge No 5226 and Bill Laidler, Chairman of the group of lodges meeting in this part of East Kent. Also shown is “Scooby” a pony with a temperament that would soften any heart.

The photo was taken in the indoor riding area, the roof of which requires replacing after being severely damaged by recent high winds. Fundraising for this roof is the central focus of Freemasons from the Thanet area as they prepare to celebrate Freemasonry’s Tercentenary in 2017.