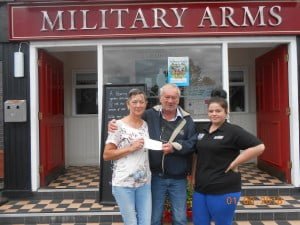 The theft of charity cash from behind the bar of a Sandbach pub prompted a rescue donation by local Freemasons. More than £300 in coins which filled a large glass jar at the Military Arms pub on Sandbach Common was stolen one evening when the bar was briefly unattended. The cash had been raised by regulars in aid of the Sunny Days Children’s Fund to buy holidays and treats for needy children with life-altering illness.

“It was a shock when we discovered the cash was missing after all the effort that our regulars put into raising the money,” said licensee Tina Edmonstone. “We informed the police but there was nothing we could do about the theft.”

That was until one of Tina’s regulars, Freemason Brian Osborne reported the theft to his Saxon Crosses Lodge in Sandbach, which promptly decided to make up for the loss by handing the Military a £300 cheque to pass on to the children’s charity.

“Such a theft was a disgraceful act by a sneak thief, but I was delighted to be able to inform Tina that our Freemasons lodge had agreed to donate £300 to make up for the loss,” said Brian, aged 73, from Elworth near Sandbach. The donation to the children’s charity was also topped up with £100 raised by customers and traders at La Boutique craft market in Sandbach.