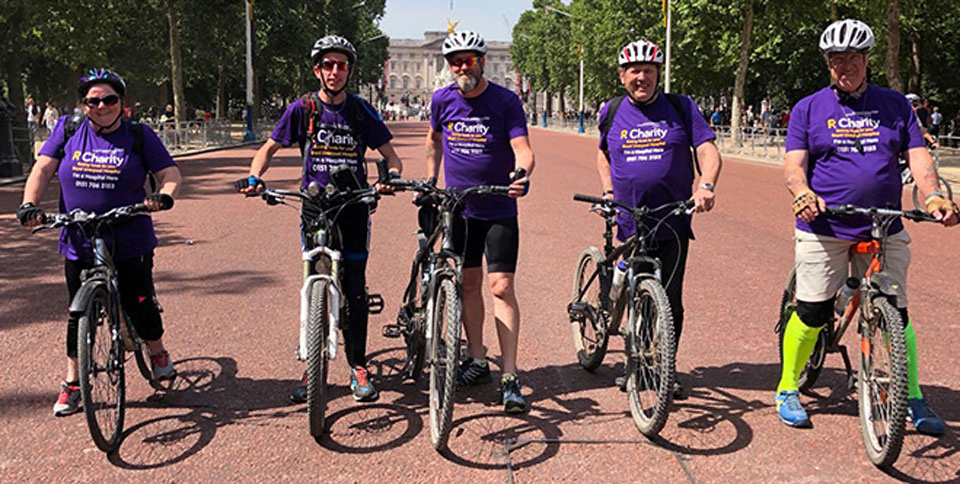 A warm Liverpool welcome awaited the brethren, ladies and friends of Temple Lodge No 1094, when they gathered for their ‘Ladies to Dine’, held at Zorba’s in Leece Street, (opposite St Luke’s, the ‘bombed out church’). After enjoying the banquet laid out before them, with the accompanying traditional Greek entertainment, the WM of Temple Lodge John Bruffell, formally welcomed all to the evening and expressed his appreciation for their attendance.

Pictured left to right, are: Mike Winterbottom, Lauren Davies, Geoffrey Lee and Marion Lee with cheques.John explained that over the last five years a number of people, including many from Temple Lodge and Royal Arch Chapter, had participated in an annual cycle ride, with the sole intention of raising charitable funds. Starting with the inaugural ride in 2014 by ‘The Grand Originals’, it has proved to be a very highly successful event on each occasion. The latest 2018 ride, which meandered along the scenic canal-route from Liverpool to London, equalled all expectations. John Bruffell then had the pleasure of presenting two cheques, one to the ‘R’ Charity based in the Royal Liverpool Hospital and the other to the West Lancashire Mark Charity Fund.

Unfortunately, the 2018 ‘star rider’, Angela McShane from the ‘R’ charity, was unable to attend, but it was appropriate that Lauren Davies was present to receive the cheque on their behalf. Lauren had been the first person from the charity that Steve Walls had contacted way back in 2013 when it all started and she took great pleasure in receiving a cheque for the remaining donation for the ‘R’ Charity for £3,306.25p. Lauren thanked all concerned, including those who were unable to attend, for their sustained support and generosity to the ‘R’ Charity, informing all present that the grand total raised for them over the five events now stood at £21,121.84p.

The other cheque was presented to Geoffrey Lee, representing the Mark Province of West Lancashire, who on this occasion was accompanied by Michael Winterbottom, the special representative for the Liverpool area. This charitable cheque for £2,810.15, was in recognition of the support which the Province had given over the five events that the brethren had participated in, both in promoting the events and by donating to the various charities that had been supported.

The formalities over, the brethren continued to enjoy the evening, before wishing each other best wishes for the festive season and all making their way home safely, with the quiet satisfaction that they had all helped to support those less fortunate than themselves.