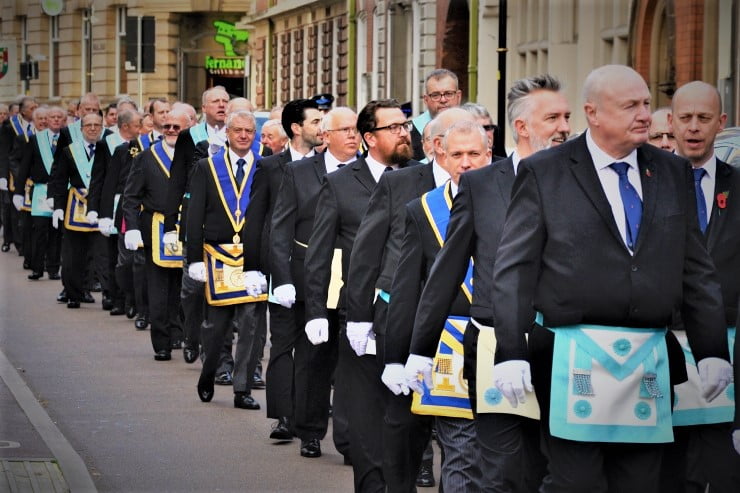 As part of the United Grand Lodge of England’s 300th Anniversary celebrations, Freemasons from across Leicestershire and Rutland took part in a historic parade through the streets of Leicester – which last occurred in 1923

In glorious sunshine, over 100 Freemasons of all ages gathered in Jubilee Square wearing their Masonic Regalia and subsequently paraded to Leicester Cathedral via the High Street, Gallowtree Gate, Market Place, Grey Friars and on to St Martins prior to a Service of Thanksgiving.

During the 18th and 19th Century, Freemasons regularly took part in public processions including assisting with the laying of many foundation stones for buildings such as the Town Hall and the Children’s Hospital at Leicester Royal Infirmary. The last occasion was on the 24th June 1923, when a special Masonic Service was held at St George’s Church to commemorate the Centenary of the laying of the first Foundation Stone in 1823.

A 20-piece brass band, consisting of members from Croft Silver Band, Wigston Band, Kibworth Band and Foresters Band, began to play at precisely 2pm and proceeded on the route. The Freemasons, including several Masters of Lodges, were lined up in two rows, and followed the band in procession and a steady pace. At the rear was the Provincial Standard Bearer bearing the Leicestershire and Rutland Banner, who was leading the Provincial Grand Master David Hagger, Assistant Provincial Grand Master Peter Kinder and the UGLE’s Deputy Grand Secretary Graham Redman.

Many shoppers in the area were intrigued at the unusual sight of the Masonic procession and stopped to watch as it went by. The Procession arrived promptly at Leicester Cathedral at 2.15pm and was welcomed by the Dean, Very Reverend David Monteith who conducted the Service of Thanksgiving.

The Provincial Grand Master David Hagger said: ‘This was a wonderful occasion to mark the Tercentenary of the formation of the first Grand Lodge in the world. I sincerely thank all the brethren who took part in this historic procession, the likes of which Leicester hasn’t seen for nearly 100 years.

‘I hope that it will lead to further interest and a better understanding of our historical society which has been an integral part of our local communities for 300 years.’