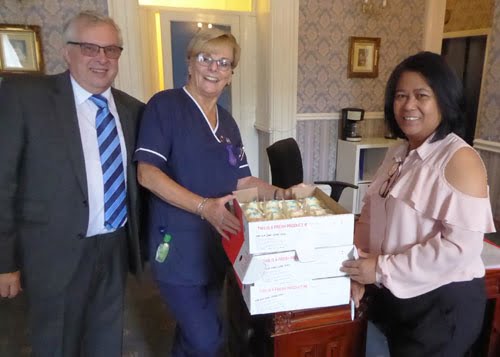 It was one of those light bulb moments that Woolton Group Vice Chairman Mike Cunliffe had a thought. All around the country Freemasons have been celebrating the tercentenary with a multitude of events from church services, black tie dinners and social occasions and Mike thought it would be a good idea if we shared our pleasure with members of the local community.

Armed with this idea Mike, along with a fellow Mason from Old Lerpoolian Lodge No 9270 Kevin Birchall, approached the local care homes in close proximity of Woolton Golf Club, where the Woolton Group meet. After much discussion, it was decided that cupcakes may be the answer, but Mike would need to clear this with the homes bearing in mind the dietary requirements of the residents.

Staff at the care homes told Mike that they would be pleased to accept the gift of cupcakes so Mike and Kevin approached Tom Williams of the Cake Factory in Old Swan who agreed that he would make up to 300 cupcakes at a preferential price, one for each year of the tercentenary.

The first batch of cupcakes were safely delivered by Mike to Kingswood Manor Care Home in Woolton where deputy manager Emily Bumatay and RGN Ann Lloyd were on hand to receive them.