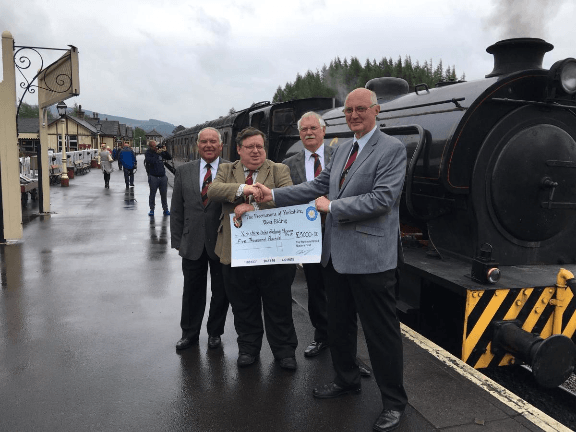 EMBSAY and Bolton Abbey Steam Railway have received a £5,000 grant from the Freemasons of Yorkshire West Riding.

Local Freemasons from Fairfax Lodge in Guiseley, supported by both Craven and Mawsis Lodges in Skipton, applied for the grant, which was awarded through West Riding Masonic Charities and will be used for the railway’s Platform 2/3 project.

Bolton Abbey Station has close connections with both towns. The preserved steam railway was originally constructed in 1888 as the Skipton and Ilkley Railway and the line continued to Leeds via Guiseley.

Also, the redundant signal box from Guiseley station and a water column from Skipton station were both preserved and re-erected at Bolton Abbey Station.

The cash grant will be used to provide replica Midland Railway period lighting on the platform which will greatly enhance the historic atmosphere of the recreated station.

Stephen Walker, the lines Business Manager said: “We are really grateful for the support from the Yorkshire Freemasons Charity. The cash enables us to finish the platform in an authentic manner, really enhancing the Victorian character of the station for future generations.”

Bolton Abbey Station was once one of the busiest in the Dales with a record of over 42,000 passengers passing though the station in one day just after the Second World War.

The railway is now operated by volunteers who hope ultimately to reconnect the railway to the national network at Skipton.