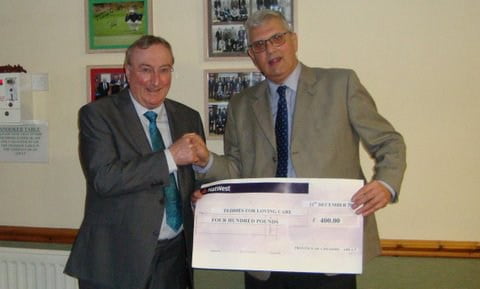 In October Area Five held a Sunday Luncheon at Haslington (Crewe) Golf Club to raise funds for the TLC and Cheshire’s Silk Band as reported on the Provincial Web News. That Luncheon generated £800.00 and was split 50/50 between the two organisations. At Haslington Golf Club WBro George Mann APGM returned on Sunday 11 December 2016 to present Ron Evans, Cheshire’s TLC Officer with his portion of the return; a cheque for £400.

During the same afternoon WBro Ron conducted a Heads and Tails competition at Samaritan Lodge’s Christmas Luncheon that generated a further £100.00 – Well done Ron and thanks to all those who took part.

George Mann APGM presenting Ron Evans with the £400.00 cheque in aid of the TLC Scheme.