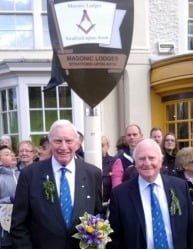 Fifty thousand people flocked to watch the parade through Stratford-upon-Avon which marked the 400th anniversay of the death of William Shakespeare. The parade was held on 23rd April, which was Shakespeare’s birthday making the occasion a joyous celebration. 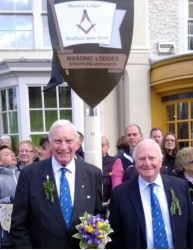 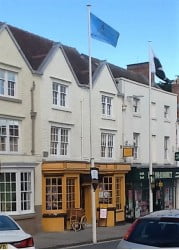 The Masonic shield and Flag

Freemasonry was represented in the flag raising ceremony and parade by W Bros Malcolm Goodyear and Mike Barry, directors of the Stratford Masonic Hall Co. acting on behalf of the three lodges and numerous orders that meet at the Great William Street Masonic Hall.

They unfurled a flag specially designed for the occasion, as shown on the shield in the accompanying photo, and then processed together with all the other dignitaries of the town to Holy Trinity Church where they presented their magnificent posies at Shakespeare’s grave. The posies were made by Mrs Pat Broughton, wife of W Bro John.

It is hoped that at future anniversaries, participation will continue. It might even be possible for regalia to be worn to emphasise further Masonic openness.