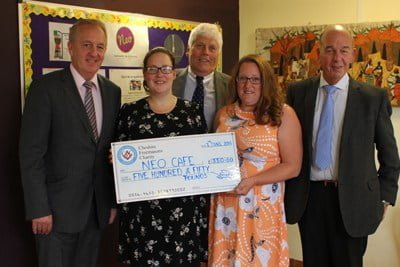 Freemasonry is proud of its record in supporting local Communities and identifies Charities and Worthy causes which have similar aims. On Friday 3rd June a small delegation of Cheshire Freemasons visted just such a Social Enterprise in Leasowe on the Wirral, Neo Community Cafe’  .

This particular Charity is run by two remarkable young Women who amongs other things collect near “best by”  waste food from Tesco, Occado, M&S and Corner shops and provide nutritious food in two low cost social supermarkets in Leasowe and Rockferry, feed Children during school holidays in parks and open spaces. They run the Tranmere Community Project luncheon club and feed low priced, quality meals to the elderly and deliver Food Hampers at Christmas.

They have been using their own cars to collect Food from the Large Supermarkets and have on occasion had to leave produce behind because their vehicles just could not carry the volume. It came to Colin Ross’s attention that they were saving up for a Van to ensure that they had sufficient space to carry full loads. A local Van Hire Company hearing of their need reduced the price of a second hand Lease hire Vehicle.  Ema and Jen having raised most of the money required were £550 short of the purchase price. This is where the Cheshire Freemasons Charity (CFC) stepped in and at Colin’s request, raised a cheque,  for the £550 which was handed to Neo Community Cafe’ and was received with joy.

Hugh Fleetwood and Ivor Henry being respectively Chairmen of Areas 1 & 2 which cover the operational area of Neo Community Cafe’ are looking at practical ways that Local Freemasons can help this inspirational Charity to continue its valuable work in this most deprived area of the Wirral.