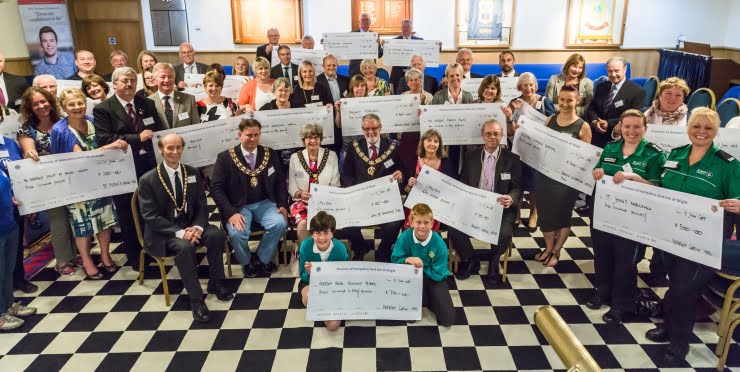 FREEMASONS from the Bordon, Alton and Petersfield masonic centres held a charity-presentation evening in celebration of the 300th year of the United Grand Lodge of England.

The evening was held at the Bordon Masonic Centre, in Woolmer Way, on June 12 and, said organisers, was well attended by local charity and community representatives.

To start the evening Adrian Bean, deputy chairman of the north-east area of the Masonic province of Hampshire and the Isle of Wight, welcomed everyone to the second charity presentation in the north-east area. This was followed by Mike Wilks, the provincial grand master of the province, giving a talk about Freemasonry and the values it represents and teaches.

All the money donated on the evening was provided directly from the membership. This was achieved by Masons holding evenings in support of local charities, or by regularly contributing to a lodge charity fund.

A total 26 charities and organisations were supported, with representatives talking about the support and services they provide to communities.

“Listening to the charity representatives explain the work they do was very humbling,” Mr Wilks said.

“It provided even more motivation for us to keep raising funds for such worthy causes.

“For 300 years we have been supporting charities and I hope we’ll still be doing it in another 300 years.”

The evening concluded with a social gathering in the dining hall of the centre.

This provided an opportunity for the charities to further explain what they do, and to learn about Freemasonry from its members.