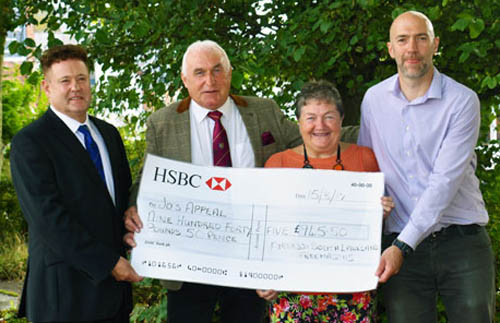 Jo Davies was a well-known and popular community journalist with the Barrow-in-Furness based Evening Mail, but sadly she died in 2015 at the age of 38 years as a result of ovarian cancer. With the aim of raising funds to help the fight against gynaecological cancer, the ‘Jo’s Appeal’ charity was established a few days before her death.

This year this good cause was the recipient of half of the proceeds from the annual Furness and South Lakeland Group Concert. The concert, featuring the group Full Benefit and the Fawcett Sisters, was held in May at Ulverston Coronation Hall and once again proved a great success.

Furness and South Lakeland Group Charity Steward Richard Wilcock, accompanied by group chairman Peter Schofield, presented a cheque for £945.50 to Jo’s husband Matt and her mother Norma Halpin. On receiving the cheque, a delighted Norma commented: “We are very grateful to receive this donation from the Freemasons. In the fight against cancer every little helps.”

Peter added: “The group is indebted to Richard and his volunteers who helped ensure the annual concert was once again an enjoyable and successful evening. It is the second successive year that Full Benefit and the Fawcett Sisters have provided an evening of first class entertainment. They, under the guidance of musical director Dean Fawcett, had obviously put in many hours of rehearsal in order to be able to deliver such a top rate show and their hard work must be acknowledged.”

The other half of the proceeds from the concert went to the Masonic Charitable Foundation 2021 Festival with each lodge in the group being credited with an equal share towards their patronage of the Festival. 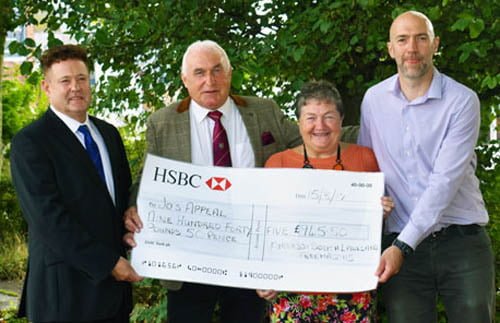