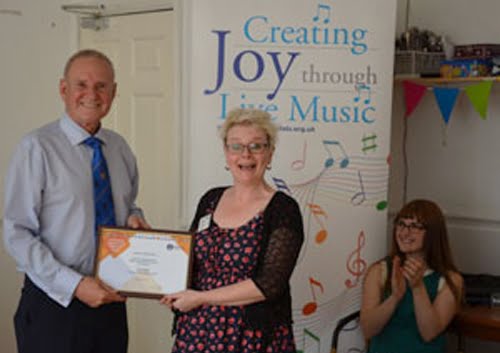 The residents of Worsley’s Walkden Manor Nursing Home welcomed an afternoon of musical entertainment provided by the charity organisation Music in Hospitals (MiH). MiH was launched in 1948 with a grant to provide live music concerts in mental and orthopaedic hospitals and in TB sanatoria. The organisation now provides live music performances across the healthcare sector for adults and children, now covering the UK and the Channel Islands.

Dave presents the cheque to Jess and Helen.

The residents and staff were seated in anticipation on a lovely summer afternoon to listen to music of their choice, provided by the popular retro music band, the ‘Retrosettes’, in the form of Paul Bytheway on guitar and vocals, Helen Bytheway on piano and vocals and Rick Weedon on percussion and vocals.

The Retrosettes perform songs from the 40s and 50s including songs from WW2, which is very appropriate for a charity that has Dame Vera Lynn as its vice president. However, the demand from the residents was dominated by requests of rock and roll numbers, specifically Elvis songs which had the residents and staff on their feet, dancing, singing and tapping their feet.

The music is especially helpful to the estimated 70% of care home residents who have dementia or some form of memory loss, as research has shown that music from their youth can temporarily stimulate memories in people with dementia and improve overall health and wellbeing and this was truly the case at Walkden Manor. 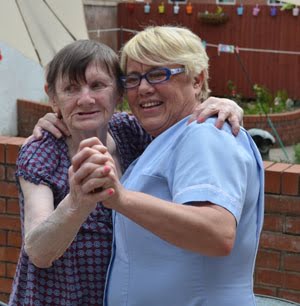 Resident and carer get up close.

In 2016, Music in Hospitals delivered concerts to 1,015 care homes with an audience of well over 25,000 residents. It is estimated that between 17-18,000 of these would have dementia or memory problems.

The concert is part of a programme of concerts in hospitals and care homes around the country by the charity Music in Hospitals, which has received a grant of £60,000 from West Lancashire Freemasons’ Charity. The grant comes through the Masonic Charitable Foundation, which received funding from Freemasons and their families from across England and Wales.

APrGM Dave Walmsley, responsible for the Eccles and South Eastern Groups in the Province of West Lancashire attended the event to present a cheque in the sum of £60,048 to the Director of Manchester North, Jess Ingham. Dave thanked the performers for their wonderful afternoon of entertainment and said: “This is a wonderful charity that has spent decades working hard in hospitals and care homes to bring the joy of live music to 10s of 1,000s of people and that the MCF are proud to be supporting them”.

As the sun went down and the music ceased, I am sure that many of the residents were left with tunes in their heads and would sleep well that night.

Steve Rowland-Jones, CEO of Music in Hospitals England and Wales said: “We are very grateful to the Freemasons for their generous grant. This will help us to reach 100s of elderly people in care homes across the country that would otherwise have been impossible.” 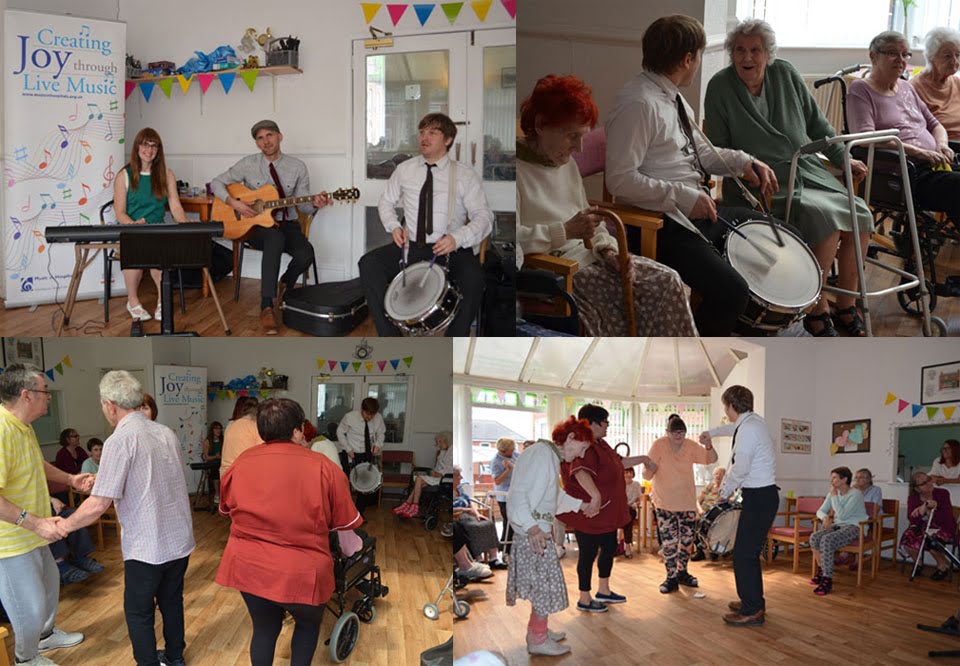 Article and photographs by Tom Fredrickson.