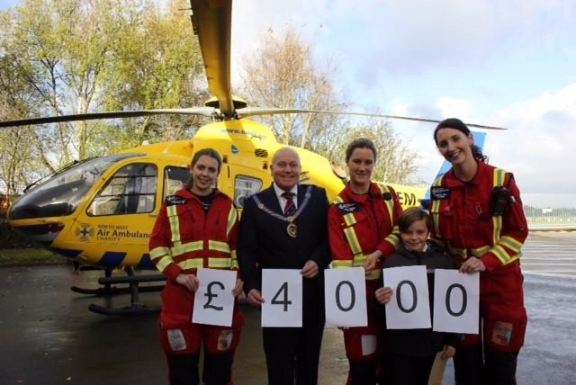 Lizzie Morley has picked up a £4,000 donation to help keep the North West Air Ambulance Charity in the air.

The gift was donated by East Lancashire Freemasons and Bolton veterinary surgeon, Chad Northcott, who heads the Masonic Province’s charity side.

Chad’s nine-year-old son, Camden, handed over a cheque to Ms Morley, aged 26, and two fellow paramedics Janet Towers, aged 28, and Deborah Rigg, aged 27, before being shown over one of the helicopters.

The North West Air Ambulance Charity, which operates from Barton and Blackpool airports with three EC135 helicopters, relies on charitable contributions. It operates all year round, covering 5,500 square miles and eight million people. Since it launched in 1999, the charity has flown more than 20,000 missions, with the ambulance called out an average of five times a day.