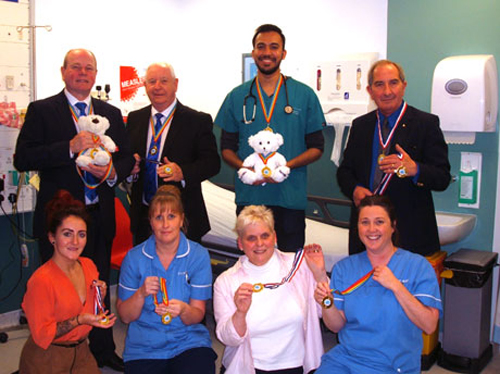 The medals will be used by the A&E staff to reward children who have been particularly brave during their treatment and will hopefully bring a smile to their faces when they need it most. The medals were designed by Peter in consultation with both A&E staff and the Blue Skies Charity. They have been donated in memory of Joanne’s late father Monty Souness, who was a highly respected member of the Masonic community for almost 60 years, both in Scotland and on the Fylde Coast. Each medal bears a centre featuring both the Masonic and Blue Skies logos and the words; ‘I’ve been brave’.

Peter and Joanne have previously been the instigators of providing Christmas presents for children attending A&E over the festive period in 2016, something they intend to repeat this year.

It is estimated that in 2017 the A&E department will treat over 15,000 children, with the highest proportion being in the group aged between new-born and three years old.

Anyone wishing to donate to the hospital, raise funds or volunteer, please contact the Blue Skies Hospital Fund at https://www.bfwh.nhs.uk/blueskies/index.php/contact or find them on Facebook.