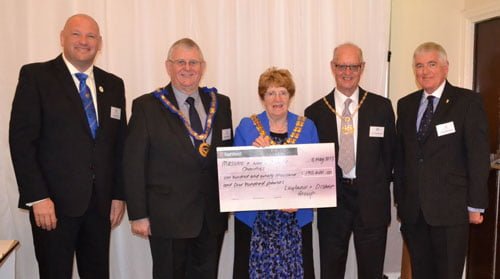 The Leyland and District Group of Freemasons once more put on a very humbling and public show, when the Chairman of Leyland Group Chris Blackwell welcomed the Mayor of South Ribble Councillor Linda Woollard and her consort Alistair, once again to their annual Giving Day. This was the eighth year in which the group had organised this event and there were over 20 local charities represented on the day.

Stewart Seddon set about welcoming the guests by giving a brief introduction about the organisation’s history and charitable background. He briefed the audience about Elias Ashmole, founder of the Ashmolean Museum at Oxford and how he wrote in his diary about becoming a Freemason in October 1646, through to the forming of United Grand Lodge in 1813 – the first Grand Lodge being formed in 1717 in London and this year being the tercentenary year, it is being celebrated across the country.

Since the last Group Giving Day across the Province of West Lancashire, both national and local charities Masonic and non-Masonic have benefitted from around a total of £190,400 from Freemasons which is equal to last year’s donations. Stewart presented a breakdown of Leyland’s contribution to the total which saw £13,835 being donated by the Leyland Group of Freemasons to non-Masonic charities and £12,980 being donated to Masonic Charities; a grand total of £26,815. He continued by announcing the following recipients together with the donations to be received by each of the charity representatives.

The presentations were to: The Alzheimer’s Society with a cheque for £300. The Legacy Rainbow House received a cheque for £450, presented by Michael Frankland and Bill Nelson.

Friends of The Space Centre Preston received a cheque for the sum of £2,000. All donations were given by the members of Leyland St Andrews Lodge No 7391 and the lodge’s ladies social committee, with the cheque being presented to Heather and David Diggins by Dave Bishop and members of the ladies’ social committee.

The North West Air Ambulance was once again presented with a cheque for £350, which comprised a donation from Farington Lodge No 7277 as well as the Leyland Group – both Terry Fowler and Dave Bishop presenting this cheque.

Derian House Children’s Hospice received £600 on the day from Terry Fowler and Farington Lodge and Ian Smith from Phoenix Lodge of Installed Masters No 9206.

Teddies for Loving Care (TLC) received a cheque for £1,565.49 from a number of lodges across the Leyland and District and Fylde Groups.

The Meningitis Now representative received a cheque for £2,155, comprising donations from Leyland Hesketh and Farington Lodges, Leyland Hesketh Ladies Committee and from the Leyland and District Group.

Finally, Stewart presented a cheque for £250 from the Leyland and District Group to the Mayor of South Ribble Councillor Linda Woollard which would be given to her nominated charities. Linda addressed the audience thanking them for their generosity and she made specific mention of the many recipients of donations and how grateful they were for them stating that these contributions will be life changing for many people.

Dave Bishop said a few words to conclude the day’s event by stating what it means not only to the Leyland Group of Freemasons to help out all charities but to the recipients of such grand donations. He thanked everyone for their attendance and hoped to see a continued support from the group over the coming year.

The Leyland Group Giving Day is always a resounding success.