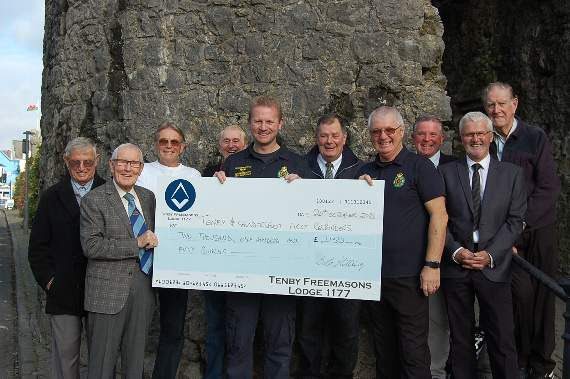 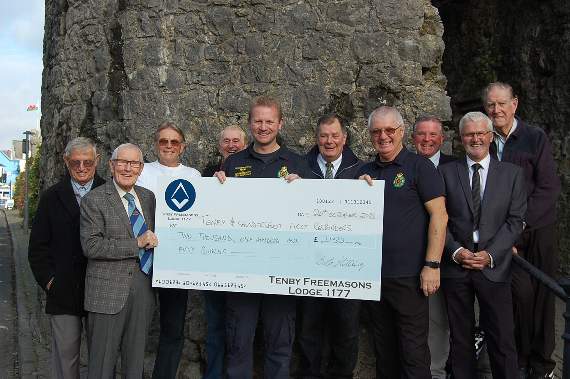 Members of Tenby Masonic Lodge gathered outside their building on South Parade recently to present a cheque to representatives of Tenby & Saundersfoot Community First Responders, for the magnificent sum of £2,150.

The cheque was handed over by Mr. Brian Hilling, the Master of Tenby Lodge, on behalf of the Masonic Province of West Wales, who regularly make significant donations to many local charities, and who recognised the vital work carried out by the First Responders, for whom the cheque was gratefully accepted by team members Tony Wall and Ben James.

Tenby and Saundersfoot First Responders is a community scheme set up by the Welsh Ambulance Service with members of the community responding to 999 calls and giving life saving treatment while an ambulance is on the way.

They can attend the scene of a medical emergency in a very short time, often arriving within a few minutes of the call and sometimes whilst the caller is still on the phone. They are trained to provide Emergency Life Support and to treat patients suffering from a range of conditions. On the arrival of an Ambulance, they form part of the team treating the patient.

Their work also includes installing defibrillators within the local community and training the public in CPR (cardiopulmonary resuscitation). They recently received the 2018 Welsh Ambulance Staff award for being the best Community First Responders team in Wales.

* Charity is an important component of Freemasonry, whose ethos calls for men of good character, sound morals and compassion. Lodge meetings usually take place monthly and there are also social family events during the year. For anyone interested in Freemasonry who may wish to be considered for membership of Tenby Lodge, please contact the secretary on 01834-844926 or by email at tenbylodge1177@gmail.com.