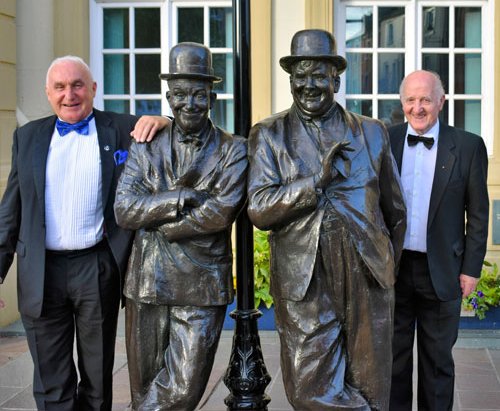 Once again, the Coronation Hall in Ulverston was the setting for the annual Furness and South Lakeland Group concert which saw almost £3,000 raised for charity. Over the years, this yearly fund-raising event has seen the appearance of acts such as Kenny Ball, Ann Breen and the Houghton Weavers.

The concerts were the idea of former group chairman Rowly Saunders who was the driving force behind them for many years. He is still heavily involved but group charity steward Richard Wilcock has now taken over the lead role.

This year saw the return of the group Full Benefit and the Fawcett Sisters. A popular local group, Full Benefit consists of Dean Fawcett on keyboards, Keith Halligan on drums, Steve Harris on bass guitar, Ian Gibbons on lead guitar and the irrepressible Andy Newsham on vocals. Dean, Keith and Steve are all members of Semper Sursum Lodge No 5622. They are all very talented and experienced performers. Adding to the occasion were the vocal talents of Dean’s daughters Victoria and Elizabeth.

The audience included the Provincial Grand Master Tony Harrison and his wife Maureen who were joined by Assistant Provincial Grand Master David Grainger and his good lady Beryl. As always on these occasions in addition to the local Masons there were a number from the Lancaster Group, headed by group chairman Jim Wilson, who had made the journey round Morecambe Bay to support the event.

Although the occasion is organised by Masons, it is not a Masonic event and there were many non-Masons present who were able to witness that the Craft is not just about ‘secret ceremonies’.

It was a tremendous evening during which all the performers had an opportunity to showcase their undoubted musical pedigrees. Andy is a singer with a tremendous range and he strutted about the stage as he sang numbers as varied as a Frank Sinatra tune and hits by the like of ELO, Lionel Ritchie and Barry White. The performance of the ELO classic ‘Mr Blue Skies’ brought the house down as it showcased the talents of all of the members of Full Benefit.

Operatically trained, Elizabeth and Andy opened the second half of the show with a performance of ‘Barcelona’ as made famous by Monserrat Cabelle and Freddie Mercury. It really was quite spine tingling and received the ovation of the night with many of the audience on their feet as they showed their appreciation. 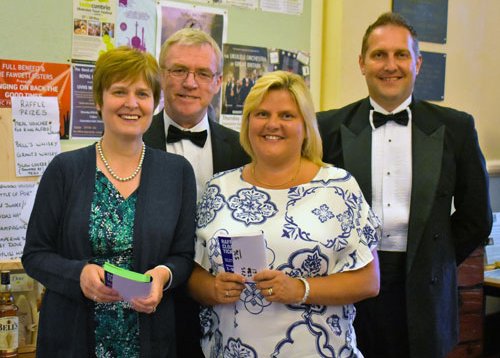 Victoria also showed that she has the family musical gene and her contribution included Gladys Knight’s ‘You’re the best thing that ever happened to me’. Together, the sisters backed by the boys in the band, put their own twist on Tina Turner’s version of ‘Proud Mary’.

It was a night which was thoroughly enjoyed by everyone who attended, no more so than those who could not resist the urge to dance in the aisles. It was great fun and raised a significant sum which will be divided between Masonic charities and the local ‘Jo’s Appeal’ charity.

Group chairman Peter Schofield afterwards commented: “It was a superb evening which saw Masons, their wives, partners and a wider public get together to have a good time and raise money for charity. What is there not to like about it? The group are indebted to Richard, Rowly and all those that assisted in any way, be it by selling raffle tickets or acting as ushers.”