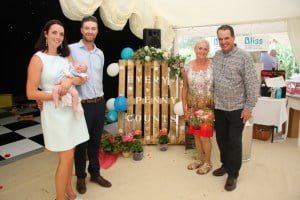 There were 160 guests made up of Masons, their wives, other family, and friends who were all accommodated in a large marquee that was the venue of David’s nephew’s wedding the day before.

All enjoyed a sumptuous meal and dessert through which there was plenty of wine and good conversation.

An auction of promises was held afterward and the guests ‘raised the bar’ with some spirited bidding for some generously donated lots. After paying the expenses and with some donations still to come in, it looks as if the total raised will be more than £5000!

The charities nominated by the Lewis family are;

BLISS – a charity which supports premature babies and their families. It also funds vital research.

EPILEPSY ACTION – who provide support and expert advice for those suffering from epilepsy.

The family would like to thank all involved in making the day a huge success.