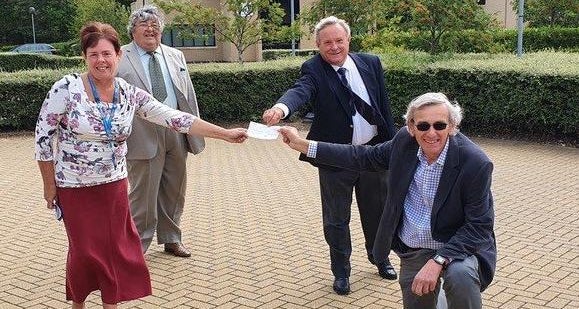 Andrew Ward, a member in Peterborough, experienced first-hand the excellent support offered by the trust when his mother Mollie was diagnosed with inoperable stomach cancer in August 2019.

Aided by a palliative care package, she was able to return to her home a month later and from that point, Andrew was supported by District Nurses and also the Hospital at Home carers, initially attending twice a day, and then three times a day, including overnight when needed.

Not only were they looking after Andrew’s mother, but also gave him a huge amount of advice and support during those difficult three weeks.

Andrew, following in his father John Ward’s footsteps, is a long-serving Freemason in Peterborough and together with fellow member Mervin Roberts, set about raising money as a thank you for the terrific help and support his family received during his mother’s illness.

At the funeral, Andrew asked for donations to go towards the District Nurses and Hospital at Home care team who all gave such a great deal of help and support and £739 was sent directly from the funeral directors. In addition, three Peterborough lodges, St Peters, Thomas Deacon and Petriburg, together donated £1,000 from their charity accounts, which the Northamptonshire and Huntingdonshire Freemasons Charity further `topped up` to make £2000 overall.

This money has been donated to the Head to Toe Charity which is the charity looking after Cambridgeshire and Peterborough NHS Foundation Trust. The Trust supports people of all ages receiving mental health, community and social care across the area.

By supporting projects over and above NHS funding, the charity works to enhance the Trusts` ability to improve the health and well-being of the people it serves and the staff who care for them.

Andrew and Mervin, together with Gerry Crawford, representative of the Freemasons Charity, were thrilled to be able to present the cheque for £2,000 to Megan Baxter, Team Leader. The money is to be earmarked specially for two specific departments – District Nurses and Hospital at Home care in the Peterborough area.

If you want to know more about Freemasonry in the Peterborough area, please visit www.northants-huntsmasons.org.uk or call the Ellindon Masonic Centre,  Peterborough on 01733 331948. The Head to Toe Charity can be contacted through their website, which is: www.headtotoecharity.org