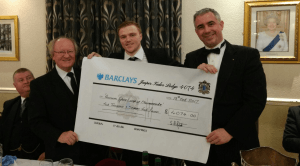 The Jasper Tudor Lodge No. 4074, donated £4074 to the Monmouthshire 1997 trust fund which is dedicated to supporting local charities. Added to that was £425.30 raised in a raffle on the occasion of the Lodge Installation evening and a mysterious donation of 70 pence to make the total given a magnificent £4500. The funds were raised throughout the year by many different events.

From raffles at Lodge meetings, guessing the weight of a pumpkin at the Provincial Grand Lodge meeting, a race night in May and a social evening in October, and a lottery bonus ball scheme but without doubt, the highest fundraiser was the event held in the Summer by the Maindee Martial Arts and Fitness Centre who raised many thousands of pounds towards helping young people achieve things that without the financial support of those around them they would never be able to do. As several Brethren are members of that group they were more than pleased to help the trust fund as well as their other good causes.

Congratulations to the Lodge in general and all those who were instrumental in raising such a large sum of money to help those less fortunate than ourselves.

To find out more about Freemasonry in North Wales you can visit their website at https://nwmasons.org/