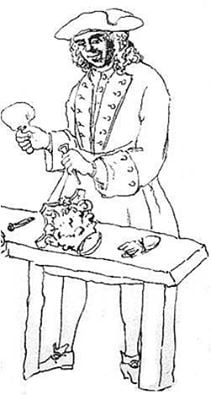 THE SCOTTISH AND IRISH REGIMENTS AT ST-GERMAIN-EN-LAYE:

The subject of this paper is the possible connection between the arrival of the exiled Jacobites in France after 1688 and the appearance of the first masonic lodges at about the same time. It seems certain that the Scottish and Irish soldiers who formed part of this exile did frequent the first lodges and it is a possibility, still the subject of controversy’, that a lodge had existed at St Germain en La:i,e from the time of the first exile of the Stewarts in ]649. This was where they again took up residence in 1689.

What is certain is that a second lodge, the St Thomas, wns founded by officers of the Scottish and Irish regiments in 1725-6 in Paris, Its founders were:

Charles Radcliffe, 5th Lord Derwentwater, natural grandson of Charles II. His elder brother, James, perished on the scaffold for his part in the ’15. Charles the younger took part in the ’45 and died in the Tower of London in 1748.

Philip, Duke of Wharton, formerly Grand Master of the Grand Lodge of London, a defector from the Hanoverians to the Stewarts, and a convert to Catholicism. Wharton was in France in 1728, and sometimes stayed at St Germain with his uncle, Captain O’Neil.

The sympathy of many Frenchmen for the Stewarts made it easy for Jacobite masons to promote their own cause, but the connections extended wider still. One interesting detail illustrates them. Montesquieu, who had been initiated in London in May 1739, records a masonic meeting at the Hotel de Bussy, presided over by Pastor Desaguiers, the Duke of Richmond, and Lord Waldegrave, British ambassador to France. It shows that we have to be cautious about separating English masonry from Scottish or Stewart masonry in France. The Duke of Richmond had a foot in both camps. Again, the lodge of Coustos Villeroy included Scots and Swedes among them Charles Francis Scheffer, who received from Lord Derwentwater a copy of the duties of freemasons dated 1735. Scheffer was n founder of the order in his country and tutor of the future Gustav III from 1756 to 1762.

All this indicates that there is a good deal of uncertainty in masonic history, 1n personalities, names and dates. But some of the uncertainty has been lifted by historical researches of the last 20 years, the best of it from non-masons, notably by Maurice Aigulhon and Ran Halevy, and by professors Ligou and Chevalier. They show us how the lodges of the eighteenth century fostered a sociability propitious for the development of ideas. That was already familiar to the Scots who came to France after the two main Jacobite rebellions, for political, religious and economic reasons. Benefiting from a fund of sympathy linked to the memory of the Auld Alliance and the aura of Mary Stewart, they were able to take part in all aspects of French life.

This i.s especially important to the present sub.iect, because of the possibility that the origins of Freemasonry lay in Scotland. The mRin sources for its Rppearance in the eie;hteenth centur:v under that specific name are the history b:v Robert Freke Gould ( 1836-1905) and the recent works by Professor David Stevenson, The First Freemasons and The Origins of Freemasonry, published in 1988 and 1989. He broke new ground left untilled by most masonic writers who have neglected the historical, political, intellectual and sociological context of the era in which their institution emerged.They have often substituted imagination for facts in glorifying a legendary past, while in fact veiling a disputed and nebulous history. But in my view they have taken nothing away from the educative and humanist value of this cultural and psychological phenomenon.

The origins of Freemasonry are confused and uncertain. But for the passage from working masonry to speculative Freemasonry there is some essential evidence confirmed by the present state of research. In the workshops of the middle ages, from which the great buildings of that era were planned and built, there existed, side by side and in one place, two types of organisation. On the one hand were corporations, guilds or fraternities, elaborate bodies with economic aims (maximising wages, organisation of the trade, mutual self-help, professional standards, social behaviour) rather than speculative ones. They were more like the chambers of commerce of our day. On the other hand were workshop lodges, places where the building workers met, the masons, stonecutters, carpenters and so on, which could be used for a number of purposes, for meetings, stockholding, training, sleeping, etc.

In the Europe of the sixteenth century, the only remaining traces of these masons’ lodges are found in Scotland, though the documents do not reveal how they functioned. So, as with many other historical problems, we cannot know for certain if the professional corporations and the masons’ lodges existing here or there were the direct ancestors of Freemasonry in its modern form. There is no proof at all of any continuity between these semi-permanent lodges of the late middle ages or Renaissance with the masons’ lodges that appeared in Scotland at the beginning of the seventeenth century. But equally, we cannot know for certain that modern Freemasonry was born in England, as was assumed by the Englishmen who instituted ‘Grand Lodge Masonry’ at the beginning of the eighteenth century.

And finally, we cannot know for certain that there was a continuous process of development between the previous organisation of masons (not to be confused with the guilds of London which covered all the trades including the masons) and Freemasonry, for the origins of which there is no extant evidence. On the contrary, we see here a development with the apparent aim of grouping the building trades of a place or region into a sort of association independent of the local corporations, under its’ own rules.