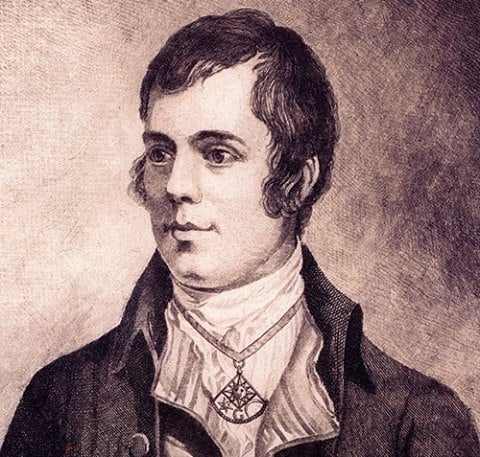 .ROBERT BURNS’ PLANNED JOURNEY TO JAMAICA MAY HAVE BEEN MERELY A CRI DE COEUR

Within the argument being made on behalf of advocating an apology from Glasgow for its historical relationship with Caribbean chattel slavery (misplaced in our opinion) there is the sub-clause about Robert Burns, pictured, and his Jamaican ambitions

We have to go back to 1786, the most critical year in the life of Burns, to find the truth of the allegations that he planned to work as a slave-master in Jamaica. Burns in 1786 was faced with many challenges including penury (the farm he shared with his brother was losing money); he recently had a child from his maid; he had Jean Armour pregnant with twins, and Mary Campbell (Highland Mary) was also to become pregnant later that year.

He writes to a friend David Brice in May on his romantic travails with Bonnie Jean Armour: “I have tried often to forget her: I have rim into all kinds of dissipation and riot, Masons meetings, drinking matches and other mischiefs, to drive her out of my head, but all in vain; and now for the grand cure: the Ship is on her way that is to take me out to Jamaica; and then farewell dear old Scotland and farewell dear ungrateful Jean for never, never will I see you more!” Then he adds another paragraph: “You will have heard that I am going to commence Poet in print and soon my works go to the press. I expect it will be a volume of about 200 pages. It is just the last foolish action I’m intend to do: and then turn a wise man as fast as possible”.

Burns had allowed his good friend Gavin Hamilton to take the poems and see if he could get them printed. Was this a Plan B to save himself from penury and from going to Jamaica?

He had accepted a post of book-keeper in Jamaica on a plantation near Port Antonio. In June he writes to John Richmond: “I have orders within three weeks at the farthest to repair aboard the Nancy from the Clyde to Jamaica and to call at Antigua … Armour has got a warrant to throw me in jail till I find security for an enormous sum.” But in July he writes again to David Brice: “I am now fixed to go for the West Indies in October”.

Were these “plans” not mere flights of fancy on the part of Burns: a dramatic gesture of poet despair? He had secured steerage passage on the brigantine Nancy from Greenock to Savannah la Mar, Westmoreland, Jamaica.(Why did he choose to go via Say la Mar at the other end of Jamaica from Port Antonio?)

Four days later he writes to James Smith of Mauchline who himself had migrated to Jamaica, that he is to sail in September straight to Port Antonio. He went to his Masonic lodge meeting in June (where strangely he accepted a post of Depute Master – a senior position for someone leaving shortly.) On 1 September, Burns informs John Richmond unconvincingly: The Nancy in which I was to have gone, did not give me warning enough… two days notice was too little for me to wind up my affairs and go for Greenock. I am now a passenger aboard the Bell, which sails the end of this month. I am under little apprehension now about Armour – the warrant is still in existence but some of the first Gentlemen in the country have offered to befriend me”. Then, on September 3, Jean Armour gave birth to twins, Jean and Robert.

But the other good news came just weeks before he was due to sail. His manuscript Poems Chiefly in the Scottish Dialect was published by John Wilson of Kilmarnock on July 31. They were all sold at the price of three shillings per copy.

The news spread to the literary hotbed of Edinburgh where in a series of reviews Burns was hailed as a genius.

On September 26, he wrote to John Kennedy: “My departure is uncertain but I do not think it will be till after harvest again. I had just taken the last farewell of a few friends, my chest was on the road to Greenock – I had composed the last song I should ever measure in Caledonia when Dr Blacklock’s opinion that I would meet with encouragement in Edinburgh for a 2nd edition fired me so much that I posted away to the city.

Did our Rabbie really intend migrating to Jamaica? Was it not a poet’s plea for attention to his misery – a cri de coeur: “If you don’t help me I’ll run away” ?

Burns didn’t go to Jamaica. And for that we must be very thankful. Jamaica’s loss is the world’s gain.