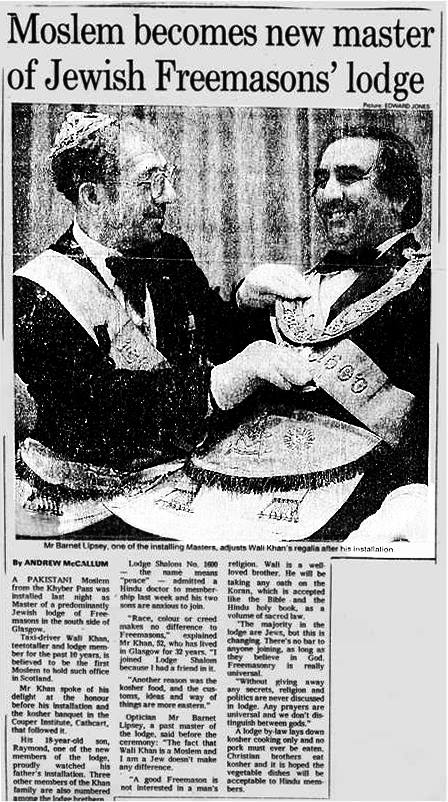 A Pakistani Moslem from the Khyber Pass was installed last night as Master of a predominately Jewish Lodge of Freemasons in the south side of Glasgow.

Taxi-driver Wali Khan, teetotaller and Lodge member for the last 10 years, is believed to be the first Moslem to hold such office in Scotland.

Mr Khan spoke of his delight at the honour before his installation and the kosher banquet in the Couper Institute, Cathcart, that followed it.

His 18 year old son, Raymond, one of the new members of the Lodge, proudly watched his father’s installation. Three other members of the Khan family are also numbered amoung the Lodge brethren.

Lodge Shalom, No.1600 – the name means “peace” – admitted a Hundu doctor to membership last week and his two sons are anxious to join.

“Race, colour or creed makes no difference to Freemasons,” explained Mr Khan 52, who has lived in Glasgow for 32 years. “I joined Lodge Shalom because I had a friend in it.

“Another reason was the kosher food, and the customs, ideas and way of things are more eastern.”

Optician Mr Barnet Lipsey, a Past Master of the Lodge said before the ceremony: “The fact that Wali Khan is a Moslem and I am a Jew doesn’t make any difference.

“A good Freemason is not interested in a man’s religion. Wali is a well loved brother. He will be taking any oath on the Koran, which is accepted like the Bible and the Hindu holy book is also a volume of sacred law.

The majority in this Lodge are Jews, but this is changing. There’s no bar to anyone joining, as long as they believe in a Supreme Being. Freemasonry is really universal.

“Without giving away any secrets, religion and politics are never discussed in Lodge. Any prayers are universal and we don’t distinguish between gods.”

A Lodge by-law lays down kosher cooking only and no pork must ever be eaten. Christian brothers eat kosher and it is hoped that vegetable dishes will be acceptable to Hindu members.

The Grand Lodge of Scotland are seeking more info, if anyone can provide a more exact date they would be most grateful. Photographs with no information attached, newspaper clippings such as this, although often containing interesting information, are reduced in importance, for lack of provenance – dates, author etc.