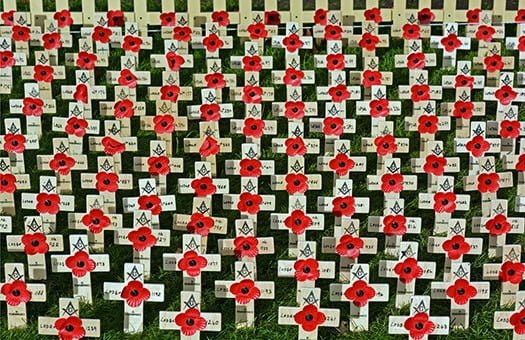 The Grand Lodge of Scotland

Each year the Grand Lodge of Scotland ‘plants’ a Poppy Cross (or Star of David or Crescent Moon) on behalf of every Lodge in Scotland in order to remember ‘en-masse’ all the Freemasons who were members of Lodges in Scotland and who served their country in wars and other conflicts.

In addition, individual Lodges (and members of those Lodges) have taken the opportunity to make a donation to Poppy Scotland by taking a Poppy Cross in the name of a friend or relative. It is quite amazing to see the amount of information that can be written on these small peices of wood. It is often a humbling experience to read the various stories so painstakingly recorded.

A large number of Scottish Freemasons who were awarded the Victoria Cross have recently been identified and this year, as it is the year dedicated to commemorating the First World War the 23 Scottish Freemasons who were awarded the VC during WWI have a special section dedicated to them. It is near the north west (Princes Street) side of Scott’s Monument (Sir Walter Scott was also a Freemason) so you may wish to make a point of seeking out that separate Masonic part of the Poppy Garden.

In 2013 £26,000+ was donated by this means to Poppy Scotland and this year it is hoped that we shall improve on that figure.

The Poppy Garden (or Remembrance Garden – a title preferred by many) is open to the public, officially, from Monday, 3 November to Wednesday, 12 November. (The photographs on this page were taken 29 October to 1 November and so one could visit today, Saturday, 1 and Sunday, 2 November but please be aware that volunteers are trying to prepare it for Monday so try not to get in their way!) The garden therefore closes immediately after Armistice Day (so called because World War One officially ended on the 11th hour, of the 11th day of the 11th month 1918). As this period of rememberance (or mourning) is relatively short those who wish to visit the Poppy Garden must do so to avoid disappointment as the garden has to be cleared quickly for subsequent civic activities.

We shall post some images of the garden here particularly for those who would wish to but cannot visit the Poppy Garden but please bear in mind that it is not possible to photograph every one of the thousands of Masonic Poppy Crosses but we hope that they provide some idea of the scale of the effort put in by Scottish Freemasons in supporting this charity which is close to the hearts of many Scots not only Scottish Freemasons.

Poppy Scotland is a charity form by combining the Earl Haig Fund (some may be surprised to learn that Haig was a Freemason) and the Scottish ‘arm’ of the Royal British Legion. To learn more about what Poppy Scotland does in supporting our ex-servicemen click here.