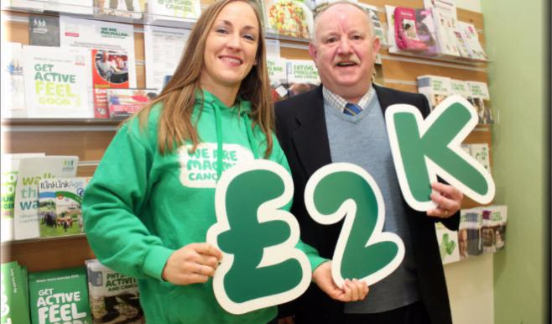 Raffling and auctioning signed rugby shirts helped Chris Northcott raise £2000 for Macmillan Cancer Support during his year in the chair of Hambrook Lodge.

Raffles and auctions during his year as Master of Hambrook Lodge resulted in £2000 being available for Chris Northcott to hand over to his chosen charity.

“Macmillan was on hand for my grandparents,” said Chris, “and I’ll never forget the help they received.” Chris was being shown around the charity’s modern facility at Southmead Hospital by the Fundraising Manager, Ceris Bradley. “These amenities are a vast improvement on what I recall,” he told her. “It’s reassuring to know that money is being well spent.”

Rugby souvenirs Chris is also a member of the Adrian Davies Lodge of Rugby Union. “As a former rugby-player, with the worn out joints to prove it, I often come across memorabilia, like signed shirts and balls. I raffled or auctioned some of these souvenirs to raise my target sum for this cheque and I had £250 left over which went to the 2018 Grand Charity Festival.”

Eighty professionals Ceris had just driven down from her home in Cheltenham to the Macmillan Wellbeing Centre at Southmead. Showing Chris into the kitchen there she said, “We have up-to-date treatment rooms in this building, but it’s possible that people could be waiting around here for long periods, so we ensure they are made as comfortable as possible. Macmillan has eighty professionals working across sites in Gloucestershire and Bristol, including nurses, therapists and psychologists. We organise cancer support groups and information centres. Here at Southmead, our Citizens’ Advice Bureau operates three days a week, so patients and families can get guidance on benefits and other help.”

Chris, who lives in south Bristol, is a qualified welder and metal-worker but has recently found himself out of work. “I got to know about Freemasonry through my next-door-neighbour,” said Chris. “One summer, he got me working on replacing the metal ducting in the kitchens at Stapleton Masonic Hall. I got to know a few of the masons there and I enjoyed their company, so naturally I joined.