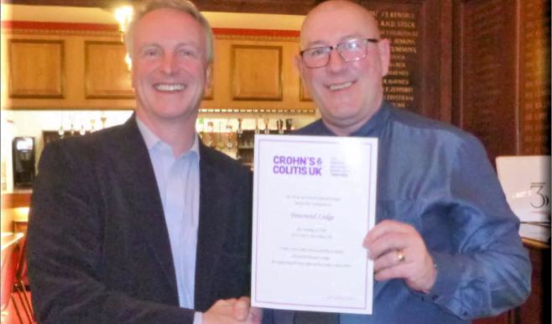 Richard Long, the Worshipful Master of Downend Lodge, presented a cheque for £2700 to Tony Walmsley (left) who was representing Crohn’s & Colitis UK.

Tony and his wife Wendy were clearly enjoying the lodge atmosphere,” writes almoner, Terry Wilmshurst. “Lodge members, their ladies, families and friends were participating in an evening of true Scottish tradition and entertainment, presided over by Richard and his wife Julie.

Remembering the immortal bard “This popular Burns Night attracted 70 people celebrated the birthday of the immortal bard with ‘sangs and clatter’. In a room adorned with St Andrew’s saltires aplenty, the skirl of pipes accompanied the haggis, held high by the chef, Richard Birkwood. On escort-duty and wielding the whisky was Alan Melville.

Tony Walmsley is the Coordinator of the Avon & North Somerset local group for the Crohn’s & Colitis UK. Accepting the cheque and expressing his gratitude, he said, “I was diagnosed with ulcerative colitis in 2010. Prior to that I’d never heard of it, which is surprising as it affects more than 300,000 people in the UK.

Having then become involved with the charity, I find my work as a volunteer rewarding, interesting and challenging.” “The very successful and enjoyable evening raised £429 for the WM’s charities,” continued Terry, “which include the 2018 Festival. “Entertainment was provided throughout the evening by Rhiannon & Jake of ‘Broken Vinyl.’”

“Then, Horn For Horn, They Stretch An’ Strive”