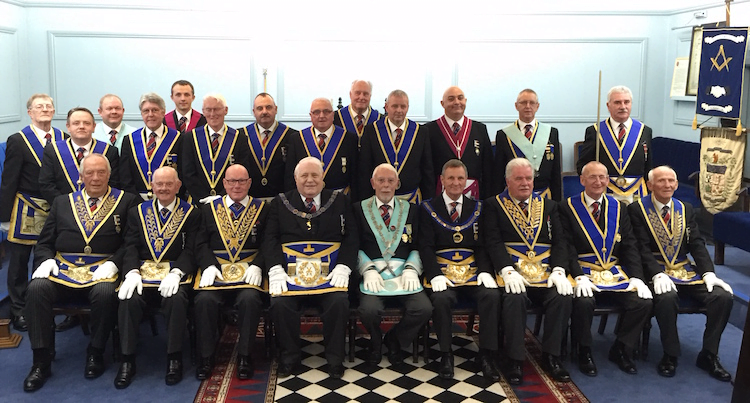 On the evening of Tuesday 13th September, 50 brethren assembled at Mill House Masonic Hall to celebrate the 225th anniversary of the Lodge of Amity and Rossemdale Forest No. 283. This Lodge had a very successful amalgamation in 2011, and whilst 225 years is not an official ‘birthday’, it was right to celebrate such an important milestone within the Province.

The Lodge was opened in due form by the Worshipful Master WBro Derek Smith PProvSGD and once the business of the lodge had been completed, a Provincial Delegation formed of Grand Lodge Officers, guided by WBro Andrew Taylor ProvDepGDC with the assistance of the Lodge DC and Deacons, and led by VWBro Derek Thornhill JP PGSswdB The Deputy Provincial Grand Master entered the lodge to join the existing Brethren from the extended District delegation already present.

The WM welcomed VWBro Thornhill and offered him the gavel, which on this occasion he was very happy to receive. VWBro Thornhill opened his presentation by saying how happy he was to be performing the celebration, as the amalgamation was one of his first duties as Deputy Provincial Grand Master. He went on to say how delighted was that the amalgamation had worked so well and how rare it was to see the birthday of such an old Lodge.

The Lodge Junior Warden WBro Donald Bright PProvGSuptWks then presented a short history of the Lodge which included the explanation of why it was established as a lunar Lodge with brethren making their way home in the complete darkness in 1791. He further went on to highlight the key dates, and made reference to the brethren known to the lodge over its rich history.

VWBro Thornhill then went on to highlight one of the historical facts that occurred in 1791, these included the fact that George III was on the throne, William Pit the younger was Prime Minister, the Ordinance Survey was established, the first issue of the Observer was issued, Michael Faraday was born and John Wesley founder of the Methodist Movement died.

The Worshipful Master then had the pleasant duty of presenting a cheque to VWBo Thornhill with a cheque towards the ELMC for the value of £283 to represent the Lodge number. The cheque was gratefully received.

VWBro Thornhill completed his presentation by saying how important it was for Brethren to interact and engage with the community and to concentrate on ways of informing the public about the role of Freemasonry in society, to be proud to say we are Freemasons.

WBro Taylor with the aid of the Lodge DC and Deacons retired the delegation and the lodge was closed. The brethren retired to the festive board.

In his response VWBro Thornhill reiterated his recruitment message and stated that this must be the focus within the Province. A committee has been established to manage this and the excellent recruitment presentation is currently making its way around the Lodge rooms in the Northern District. The Provincial trailer is also making a difference to bringing Freemasonry to the community.

He concluded by proposing a toast to the Worshipful Master and the Lodge. The Worshipful Master responded by saying how proud he was to be the Master of such a wonderful Lodge and thanked all the officers for making the evening special. He also plans to be around for a few more years to celebrate his own Masonic 50th birthday in 2020. We all look forward to celebrating it with him!

The Worshipful Master with the Provincial Deputation 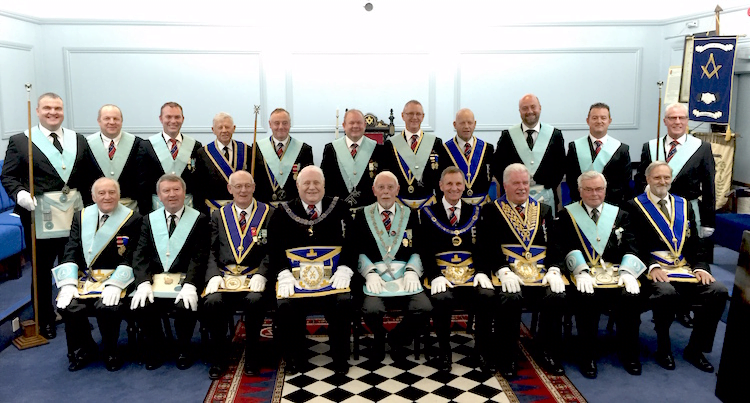 The Brethren of the Lodge of Amity and Rossendale Forest No. 283 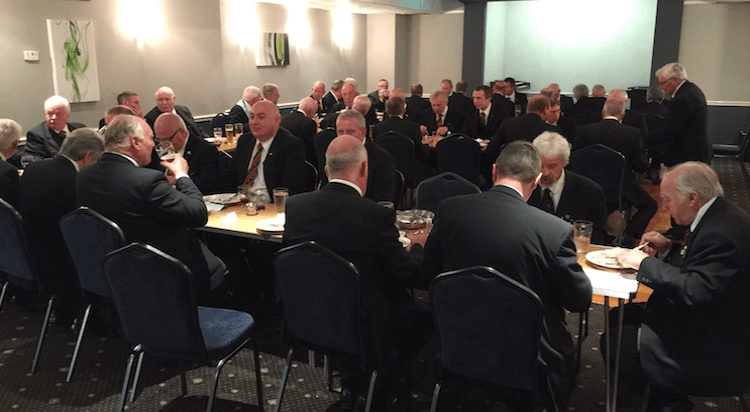 The Brethren enjoying a wonderful Festive Board