In Whalley on the day after Boxing Day it was obvious that both residents and rescue volunteers needed to have basic refreshments such as tea, coffee and biscuits in the aftermath of the dreadful floods.  Abbey Lodge in Whalley came to the rescue with a no questions asked donation of £500.

The first purchase was 2,000 plastic cups followed by tea, coffee sugar and milk.Once things had been assessed, the Freemasons donated a further £17,500 for specific relief of hardship cases through the Whalley, Billington and District Flood Relief Committee led by Whalley Lions Club.  Other monies from the Freemasons were also distributed in East Lancashire including Padiham.Grants are still being given to residents in Whalley and recovery for some is still some time off.

In addition to the £18,000 already given by the Freemasons, Abbey Chapter, based in Whalley, have topped up the Flood Relief Fund by a further £500.  Local Freemason Jim Sutcliffe who lives in Whalley said that the contributions were just a small part of what the Freemasons do both nationally and locally.  He hoped that there wouldn’t be a further disaster in Whalley but if there was, the response would be better next time with the Masonic Hall on Accrington Road being opened for residents to get a cup of tea and a bit of warmth at the very least. 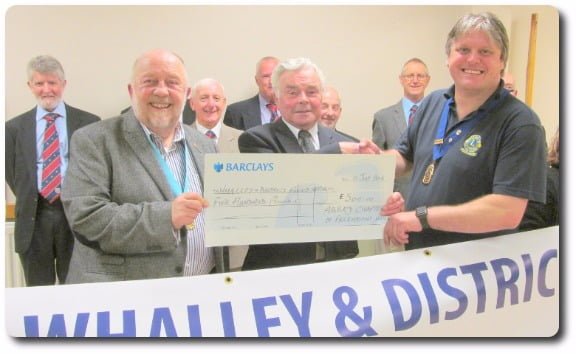 Pictured are some of the Whalley Freemasons with First Principal Donald Bright (centre) of Abbey Chapter, which is based in Whalley, handing a cheque to Neil Martin President of Whalley Lions Club (right) with David Bell 1st Vice President (left).