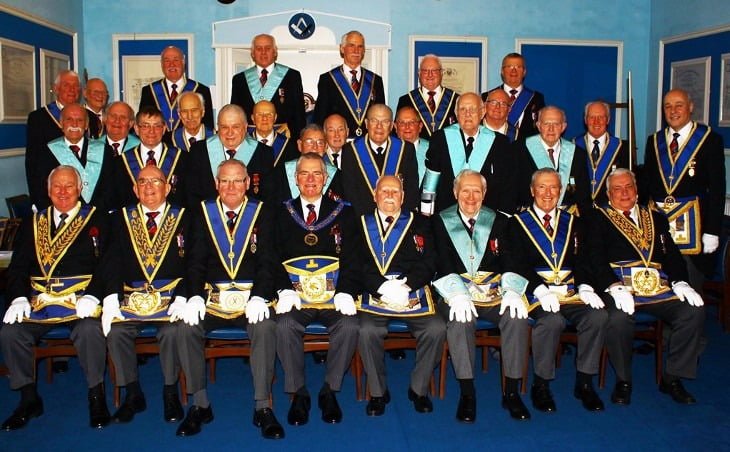 The Regular Meeting of Three Shires Lodge No 9397 that took place on Wednesday 16th December 2015 was all about WBro Edmund Kenworthy, or Eddie as he is known by all of his many friends.

The meeting started when WBro John Pearson, PSGD, APGM entered the Lodge Room, accompanied by a District Delegation under the direction of WBro Cowan ProvDepGDC. The Worshipful Master then welcomed our Assistant Provincial Grand Master and offered him the gavel, and was no doubt ever so grateful when, on this occasion, he accepted it and took the chair.

Of course, the main business of this meeting was to celebrate the 50th Anniversary in Freemasonry of WBro.Edmund Kenworthy PPGSwdB. Eddie was duly placed in the centre of the Lodge room, facing the WBro in the Chair, and the secretary, his son Ian, read the minutes of his initiation meeting into King George V Lodge No.3529. WBro Ian Kenworthy then went on to deliver a tribute to his father which was warmly received.

WBro Pearson then addressed those Brethren present, describing some of the things that occurred back in 1965, even before England won the World Cup, and completed the Tribute to WBro Kenworthy by describing his Masonic History. He then concluded by presenting a letter from the Right Worshipful Provincial Grand Master as well as an illuminated certificate to WBro Kenworthy. However, the meeting was rightly about Eddie, and I shall now pass you over to his son, Ian, who will tell you about his Dad.

Eddie was educated at Shoreham-by-Sea and Audenshaw Grammar Schools until he was 16 years old. He then took an apprenticeship as a draughtsman at Northern Aircraft based in Ashton-under-Lyne. That was in 1942, during World War 2, and as this was a reserved occupation he was exempt from National Service.

When the war finished he was given the option of moving back to Coventry with the company, but he was settled in this area so they arranged a transfer to a local company, Hall & Kay, to complete his apprenticeship. The main clients of this new Company were cotton mills throughout Lancashire and overseas, so quite a bit of change.

He later moved to Daniel Adamson, designing the Lancashire Boiler that were used in all the Lancashire cotton mills. That was followed by a whole career in Engineering, doing everything from Richmond Sausages to working on the Mersey Tunnels.

Then he tried his hand at Sales, with a local company, Glover Engineering in Mossley who built and installed the cable chair lift at the Great Orme in Llandudno. The latter years of his working life were spent as a newsagent in Mossley until retirement at the age of 60 in 1986.

He is a member of Albion Church and met his wife Jean at Sunday school when they were both members of the youth club!  They married in July 1947 and have 2 sons and 2 daughters, 14 grandchildren and 10 great grandchildren. Sadly, Jean died in October 2015 after a long spell of ill health.

Before becoming a Freemason Eddie was an active member of Ashton Round Table raising funds to help the local community and those in need. He waited for many years to become a Freemason as many of the brethren who knew him died before they could propose him, indeed, at one time he was suspected of being a jinx!

Eddie was, finally, initiated into King George V Lodge no 3529 on 23rd November 1965. As was often the case in those long ago days, he was not Installed as Master until 26th October 1976. He joined Three Shires Lodge on 16th October 1991 and was installed as Master on 20th April 2011. (Editor. I was a little perplexed to discover that Eddie was invited to be a founder of Three Shires Lodge, but was not old enough at the consecration! I asked Ian about this, pointing out that Eddie, at that time, was 64 years old, but Ian assured me that when it was consecrated the minimum age for joining the Lodge was 65 years! Don’t times change.)

His first Provincial Rank came on 16th October 1991 when he was appointed as PProvJGD, he was later promoted to the rank of PProvGSuptWks on 10th May 1994 and to PProvGSwdB on 13th May 2003.

In the Royal Arch Eddie was exalted into Chapter of Faith No 210 on 23rd September 1968, he joined Prince Alfred Chapter on 16th April 1985 and was a Founder Member of Three Shires Chapter on 17th November 1993. He was appointed as PProvAGSoj on 11th April 1990, promoted as PProvDepGReg on 17th March 1998 and as PProvGSwdB on 22nd February 2012.

Eddie, and his son Ian, enjoy their Freemasonry together, as well in their mother Lodge, King George V (which unfortunately closed some time ago) as in those other Lodges and Chapters that they are in today. In KGV Ian was Eddie’s first initiate following his installation, and Eddie was proud to conduct both the Passing and Raising of his son. For many years Eddie was the Lodge District Representative, and was on the Management Committee at Albert House where he was involved in organising the Children’s Christmas Parties and New Year Dinners. In Three Shires Lodge Father and Son followed each other through the chair. They were founders of Three Shires Chapter and Eddie actually installed Ian into the 1st Principals chair 3 years ago.

Outside the Craft, Eddie’s interests include watching football, by way of Sky Sports nowadays, though he used to take his boys to a match every week when they were youngsters. He enjoys holidays and has been all around the world both on tours and numerous cruises.

(Editor’s Note: My thanks go to the Secretary of 3 Shires Lodge – WBro Ian Kenworthy, for the text of this article, and to the Deputy District Chairman – WBro Steve Boyle for the use of his photographs. Text and Photographs are copyright to them.)