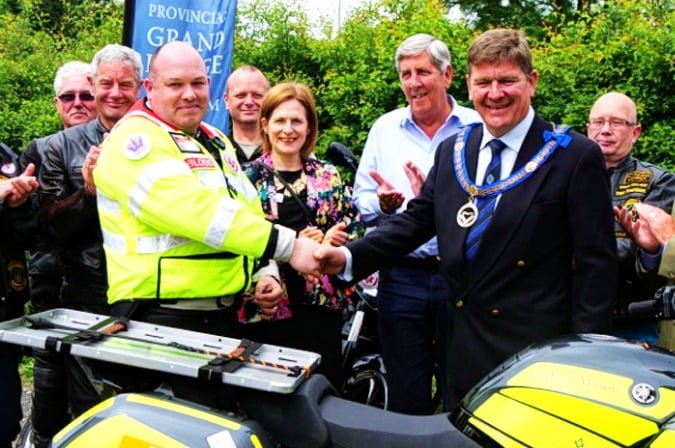 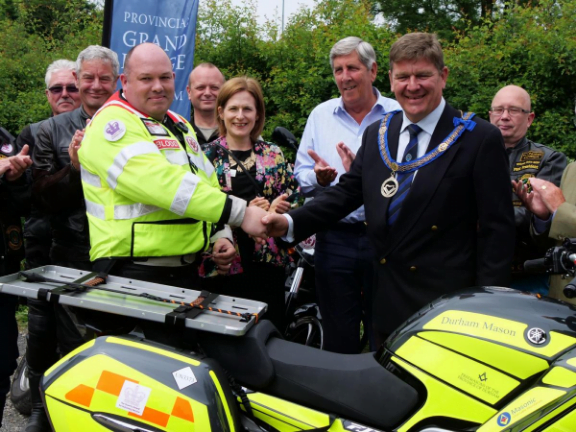 THE new addition to the Northumbria Blood Bikes fleet was bought with a £15,000 grant from the Masonic Charitable Foundation as part of the 300th anniversary celebrations of Freemasonry.

The bike, which has been named Durham Mason, includes the MCF and Durham Freemasons logos across its livery. The new fully equipped bike will become part of the operational fleet helping to save lives across the North-East.

Assistant Provincial Grand Masters, John Watts said: “As an enthusiastic blood bike volunteer rider and Freemason it gives me the greatest of pleasure to formally hand over this new bike to Northumbria Blood Bikes on behalf of the Masonic Charitable Foundation.

“We are delighted NBB have named it Durham Mason and sincerely hope our members as well as the general public will enjoy seeing it on duty throughout the region carrying out lifesaving and cost-saving work for the NHS.”

Kirsty Lawrence, publicity officer for Northumbria Blood Bikes, said: “With the demand for our volunteer run service increasing, the number of jobs we carry out each month, means we cover a greater number of miles.

“This bike will go straight into our front line operational fleet potentially saving hundreds of lives of people in the North-East. On behalf of Northumbria Blood Bikes I want to say a big thank you to all those involved who enabled us to have this opportunity.

“We really appreciate the continued support from the Freemasons not only for our regional Blood Bike charity but across the country.”